The most recent speaker in the 2017-18 President’s Symposium and White Paper Project lecture series called on students, faculty, and staff to look within themselves and recognize their prejudices to begin to address the inequity that exists in health care.

Michelle Morse, MD, MPH, founder and co-director of EqualHealth, assistant program director for internal medicine at Brigham and Women’s Hospital in Boston, and a faculty member at Harvard Medical School, was the third speaker on this year’s topic of Global Literacy. Eight fellows representing five schools at the University of Maryland, Baltimore (UMB) are studying the topic and will author a white paper and present recommendations to the University community in the spring. Morse’s lecture on Feb. 13 at the SMC Campus Center was titled “Accelerating Praxis: Your Role in the Global Health Equity Movement Today.” 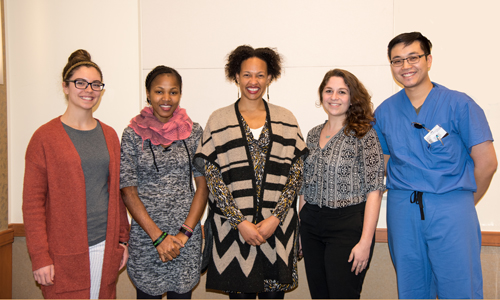 “I think it’s really easy for me to say, ‘University of Maryland, Baltimore, you need to band together and do something about health equity,’ ” Morse said. “It’s a lot harder to suggest you start doing that work by doing the work on yourselves and recognizing that each of us has prejudices, each of us has areas where we do discriminate, and if we could start with that concept … we might get somewhere.”

Morse began by outlining what she called three “truths”:

When you look at medical education in the U.S., Morse pointed out, the first couple of years of training are focused on the biomedical model.

“There are probably reasons for that,” Morse said. “But in reality, most of the research that you are going to see out there will tell you that far bigger than the biological component of treating health and trying to achieve health for all are the behavioral, societal, and structural forces that really lead to some people from some communities being sicker than others.”

Morse said that education is not neutral. Covert messages, sometimes called the “hidden curriculum,” exist within the education in medical schools. This has led her to the idea of social medicine and to her work at EqualHealth, which is striving to transform the medical and nursing education system in Haiti.

“The idea behind social medicine is really that poor health or illness is not a purely biological phenomenon,” Morse explained. “It is much deeper than biological but also driven predominantly by social and structural factors.”

Those factors may include:

“What social medicine attempts to do is call in social sciences as a way to help understand the very complex disease paradigm and understand them in a way that goes beyond the biological paradigm,” Morse said.

There needs to be a new model of education, a “disruptive” model, Morse said. She supports creating a classroom where students are teachers and teachers are students, and everyone is learning from each other.

“That can be hard to reproduce in medicine, but I don’t think it’s impossible,” she said.

Morse offered three principals of action to those in the audience:

“We need to recognize that a lot of the work we need to do is educating ourselves about what structural violence and racism and capitalism and all of these systems do to people — to bodies — to really, unfortunately, result in the poor health outcomes,” she said. “But it’s also the idea that to achieve health equity, we have to do it together in humility.”

In a question-and-answer session after the lecture, a UMB staff member asked how students could effect change without putting themselves at risk. Morse agreed that when addressing system-level or curricular changes, students should not attempt it alone but approach other students of the same opinion. They should then work together to plan a path forward and possible outcomes to present as a group.

“As tuition-paying students, you have a lot of power,” she said. “But I do think it’s too risky for any one student to approach anybody.”

Esther Kimani, a fourth-year student at the School of Pharmacy and one of the President’s Fellows in attendance, said she found the lecture enlightening

“It made me really look within and ask myself a lot of questions,” she said. “If we answer a lot of the questions she asked us, we can have a big impact as health professionals.”

The next lecture in the Global Literacy speaker series will be March 5 at 4 p.m. at the SMC Campus Center and will feature Medina López-Portillo, PhD, adjunct professor and intercultural and diversity trainer at the University of Maryland, Baltimore County and the University of Denver. She will speak on “Interacting and Engaging with Individuals of Diverse Backgrounds.”