Face to Face: The Latest on COVID-19 Vaccines

As a Food and Drug Administration (FDA) advisory committee met in an all-day session to consider the first emergency use authorization (EUA) for a COVID-19 vaccine Dec. 10, University of Maryland, Baltimore (UMB) President Bruce E. Jarrell, MD, FACS, used his weekly webcast to bring the UMB community up to date on the latest vaccine developments from around the world. Joining him on Virtual Face to Face with President Bruce Jarrell was Kathleen M. Neuzil, MD, MPH, FIDSA, the Myron M. Levine, MD, DTPH, Professor in Vaccinology and director, Center for Vaccine Development and Global Health (CVD).

The subject of the FDA advisory committee meeting, the two-stage vaccine candidate developed by Pfizer and BioNTech, was first engaged in human clinical trials at the CVD. EUA (which the committee did recommend at the conclusion of its meeting and after the Face to Face program ended) is the FDA’s tool to allow delivery of medical countermeasures during a health emergency even before the agency has completed its normal — and usually very lengthy — approval process. 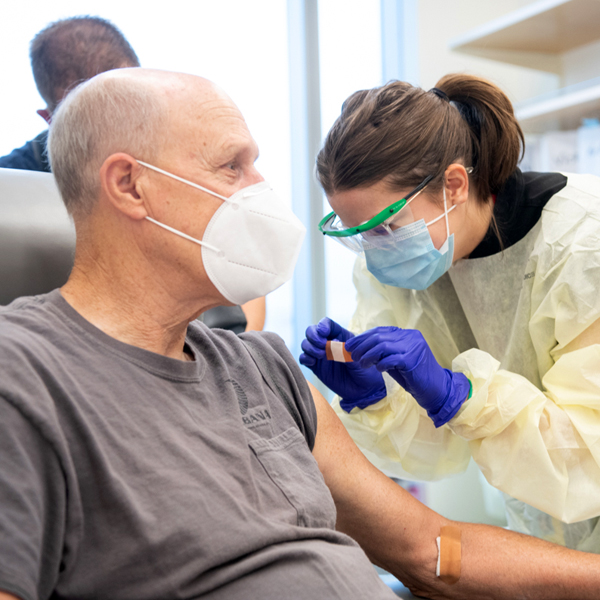 Dr. Jarrell participated in the Moderna vaccine candidate phase 3 trial at the CVD in September.

Two days prior to the program, the FDA released a staff review of trial data that showed “efficacy in preventing confirmed COVID-19 occurring at least 7 days after the second dose of vaccine was 95.0%.” Regarding safety, the report said study results showed “no specific safety concerns identified that would preclude issuance of an EUA.” That doesn’t mean there were no side effects. A majority of those who received the actual vaccine candidate did experience some fatigue (62.9%) and headaches (55.1%). Many also reported chills (31.9%), joint pain (23.6%), and fever (14.2%). Although the frequency of serious adverse events was low, the report did note four cases of Bell’s palsy — partial and usually temporary weakness of facial muscles — although it’s not clear those were caused by the vaccine itself.

Another leading vaccine candidate, developed by Moderna, also requires two doses, and has seen almost the same positive results. That vaccine candidate will get its hearing on EUA approval on Dec. 17. In all, 14 vaccine candidates around the world have now reached stage 3 testing — including those of AstraZeneca and Oxford University, Maryland-based Novavax, and Johnson and Johnson.

Assuming final approval by the FDA, Maryland expects to have the first batch of about 155,000 doses by next week, Gov. Larry Hogan explained at a recent news conference. Those vaccines will go to hospital workers and nursing home residents. The federal government says if both the Pfizer and Moderna vaccines are approved, sufficient doses will be available in the U.S. for about 20 million people by the end of the year.

“I would say starting in April, May, June, July — as we get into the late spring and early summer — that people in the so-called general population, who do not have underlying conditions or other designations that would make them priority, could get” shots, Anthony S. Fauci, MD, director of the National Institute of Allergies and Infectious Diseases, said at a recent news conference.

Although Pfizer started shipping the vaccine from its plant in Belgium to the U.S. at the end of November, it was Great Britain that cleared the vaccine for use first. Inoculations began there on Tuesday. On Wednesday, Canada also approved the Pfizer vaccine for use in its national health system.

A limiting factor in any vaccine’s ability to inhibit the spread of infection is, of course, the willingness of the population to get the shot. A poll released by the Associated Press-NORC Center for Public Affairs Research three days before the program shows only about half of Americans now say they plan to get a COVID-19 vaccine. One-quarter said they would not get the vaccine. The remaining quarter said they’d take a wait-and-see approach. Nearly a third (32%) said they were not confident that approved vaccines have been tested adequately for safety and effectiveness.

That’s a critical concern for state and federal health officials, who note a rapidly increasing rate of infection and deaths due to COVID-19 in the U.S. As of Dec. 9, more than 15 million Americans had been infected with the coronavirus and more than 286,000 had died of it. The daily average of new cases in the U.S. is now above 200,000, even though the Centers for Disease Control and Prevention says fallout from Thanksgiving travel and gatherings has not yet been realized. The agency is also concerned about the Hanukkah, Christmas, and New Year’s holidays. Worldwide, more than 68 million people have been infected and more than 1.5 million have died.

The program’s audience of more than 300 filled the hour with a wide range of questions, including questions about health concerns for people who are pregnant or have an autoimmune disease, whether the vaccine will provide long-lasting protection and prevent them from transmitting COVID-19, and whether new COVID-19 vaccines will be required in the future to guard against different forms of the virus.

Watch the whole conversation by accessing the link at the top of the page.