The career advice Rear Adm. Sylvia Trent-Adams’ grandfather imparted to her as a young girl was brief: for job security, become either a nurse or an undertaker because sickness and death are guaranteed in life.

“Mortuary science is not my thing, so nursing is where I landed,” said Trent-Adams, PhD, MS ’99, RN, FAAN, the guest speaker at the University of Maryland School of Nursing (UMSON) commencement ceremony held Dec. 12 at the Hippodrome Theatre in Baltimore for summer and fall graduates. “I never thought that when I graduated from nursing school that I would end up becoming the deputy surgeon general. If you probably had said that to me at that point in time I would have said, ‘Yeah, right. What have you been smoking?’ ”

As deputy surgeon general of the U.S. Department of Health and Human Services, Trent-Adams advises and supports the surgeon general with operations of the U.S. Public Health Service Commissioned Corps, which provides health care to medically underserved populations, identifies health hazards in the environment, conducts and supports biomedical, behavioral, and health services research, and works with other nations and international agencies on global health problems. 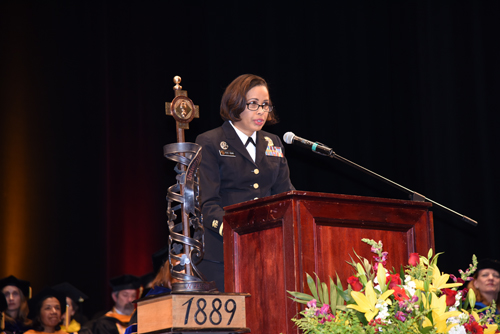 “I hope that you will dream and have an unlimited vision about what can be,” she said.

The 282 degrees awarded by UMSON included 177 Bachelor of Science in Nursing (BSN), 84 Master of Science (MS), 14 Doctor of Nursing Practice (DNP), five Doctor of Philosophy, and two certificate graduates. University of Maryland, Baltimore President Jay A. Perman, MD, conferred degrees to the class, adding it was a “great honor and privilege” to do so.

A similar ceremony was held Dec. 9 for UMSON graduates at the Universities at Shady Grove (USG)

“You begin your careers at a time when nursing presents unparalleled possibilities,” UMSON Dean Jane M. Kirschling, PhD, RN, FAAN, told the graduates at the Baltimore ceremony. “No other profession offers such a diverse career path and opportunities for advancement.”

Before enrolling in nursing school, Trent-Adams had received an ROTC scholarship requiring a four-year obligation in the armed services. “My plan was to do four years and get out,” she said.

But after joining the U.S. Army, she was drawn to a career in public health service, which opened the door to a variety of positions. In addition to direct patient care, she assisted in developing clinical trial programs, designed and implemented community-based programs in underserved communities, and assisted setting up a field hospital in West Africa to assist health care workers affected by Ebola.

“There is so much out there for us as a profession. The sky is the limit and we may one day have a nurse astronaut setting up a space station,” she said.

“I think the caliber of nurses here in this theater, you have the capability of changing the world,” Trent-Adams continued. “I would like to challenge you to always carry with you the excitement and the exuberance of today. Dream big and allow yourselves to chart your own course."

Master of Science graduate Kristine Joy Fulgencio Villaruel, selected as the ceremony’s student speaker, quoted Mark Twain when she said, “Twenty years from now, you will be more disappointed by the things you didn’t do than by the ones you did do. So throw off the bowlines. Sail away from the safe harbor. Catch the trade winds in your sails. Explore. Dream. Discover.”

“Like me, I am sure most of us have felt like this day would never come,” she said. “No matter how long that road was … our journey to this moment is one that we will treasure for the rest of our lives. Now, as we begin a new adventure, we must bear in mind that this education is both a treasure and a choice. We can choose to use this to become meaningful drivers of change in our current and future workplace and make a difference in the society we live in. “

Photos from the University of Maryland School of Nursing December 2016 graduation ceremony in Baltimore may be viewed here.