Class Teaches Residents How to 'Stop the Bleed'

Danielle Pelaez spent a recent evening at the University of Maryland, Baltimore’s Community Engagement Center (CEC) learning how to stop someone from bleeding to death.

Pelaez, a research program coordinator at Johns Hopkins Bloomberg School of Public Health and a West Baltimore resident, was glad the “Stop the Bleed” class was offered in the evening so she could attend.

“I feel emergencies happen pretty often in the neighborhood and it’s usually a while wait for an ambulance to arrive,” she said. Not too long ago, a man outside her house was bleeding from the head, and the first two times she called 911, she got the answering machine. 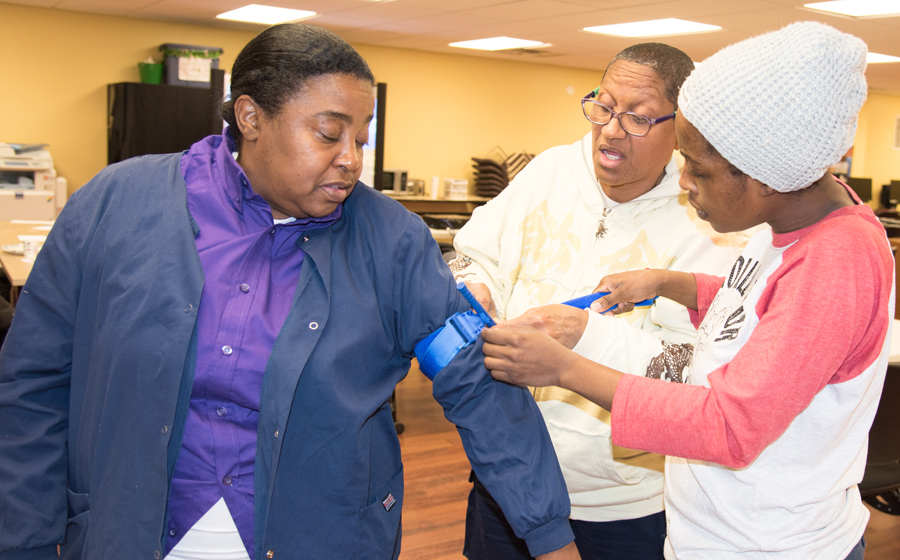 Annie Coples lends her arm to Jeanette Snowden and Sharina Thompson, who were practicing using a tourniquet at a Stop the Bleed class at UMB's Community Engagement Center.

“This makes me feel more confident,” she said after the class. “I know what to do on the spot. I thought it was great. … It was really hands-on.”

The CEC offered the class as part of a series called “Taking Care of Our Own,” organized by interns Janeé Franklin and Sabrina Elgersma, both students at the University of Maryland School of Social Work.

Stop the Bleed is a national awareness campaign and call to action that was launched in October 2015 and is the initiative of the American College of Surgeons. It is intended to cultivate grassroots efforts that encourage bystanders to become trained, equipped, and empowered to help in a bleeding emergency before professional help arrives. This past summer, the University of Maryland R Adams Cowley Shock Trauma Center launched a Stop the Bleed campaign locally.

At the time of the launch, Thomas Scalea, MD, Francis X. Kelly Distinguished Professor of Trauma at the University of Maryland School of Medicine (UMSOM) and physician-in-chief at Shock Trauma, explained how easy it is to learn to stop bleeding.

“The training is the equivalent of bystander CPR or learning to use an AED,” he said. “Anyone can learn the life-saving skills of bleeding control.”

Sixteen residents of all ages attended the class at the CEC run by Habeeba Park, MD, a trauma surgeon and assistant professor at UMSOM who is heading up Shock Trauma’s Stop the Bleed program. She explained how to use specialized tourniquets and demonstrated how to “pack” a wound to staunch the flow of blood.

“It hurts,” she said. “If they are having pain, then it probably means you are doing it right.”

She also fielded a number of questions ranging from the risk of blood exposure to what to do if the paramedics are taking too long to arrive.

“The exposure risk is there, I’m not going to lie to you,” Park said, regarding exposure to contaminated blood. “If you decide not to deal with it, it’s up to you. First and foremost, you need to keep yourself safe.”

As for paramedics’ slow arrival, she said, “If you can get to the hospital faster, then do that.”

At the end of the class, all participants had the opportunity to practice applying a tourniquet and packing a wound by stuffing it with cloth to stop the bleeding. Alan Brown, a Sandtown resident, helped 5-year-old Blair Pinacle, also from West Baltimore, practice on an artificial limb. Brown said he came because he wanted to be prepared. Three years ago, he was stabbed in the arm during a robbery and almost lost his life.

“In these times, you really need this,” he said. “You never know whose life you might save. It could be a family member who fell down the stairs or there is so much drama and tragedy going on in Baltimore today. You never know.”

“It is so important to have a venue where [people] can ask questions and get responses. They are taking away information that is exactly what they need. … It’s community-specific,” she said, explaining that stabbings are much more prevalent these days and ambulances are definitely slow to respond in West Baltimore. “They see it on the streets. It’s not the same over in Canton.”

Park is hoping to bring the Stop the Bleed program to as many schools and places of worship as possible and to have Stop the Bleed kits — with tourniquets, gauze, and gloves — installed in these venues as well. Philanthropic business support is needed to reach this goal, she explained.

Meanwhile, Franklin and Elgersma are planning other possible topics for their series at the CEC, including training on naloxone, which combats the effect of an opioid overdose.

“People want to help out their neighbors in crisis,” Franklin said.