“Like a lot of the country, Baltimore City and the state of Maryland are experiencing unprecedented, epidemic opioid addiction,” Mark O’Brien, JD, director of opioid overdose prevention and treatment with the Baltimore City Health Department (BCHD), said at an Aug. 24 meeting with University of Maryland, Baltimore (UMB) police.

O’Brien and colleague Sgt. Donald Slimmer of the Baltimore Police Department briefed UMB police on the state of opioid use in the city and the rising level of fatal overdoses, and trained them to save the lives of overdose victims. 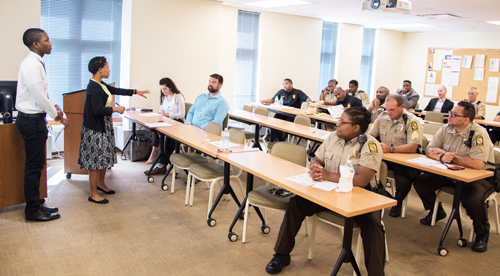 “What we’re seeing in Baltimore is that our rates of addiction are climbing slowly, but the drugs are becoming much more devastating, and the driver of this is fentanyl,” O’Brien told the officers. Fentanyl is a potent opioid pain medication that is much less expensive than heroin, thus rapidly growing in popularity with recreational drug users.

Baltimore experienced 225 alcohol- and drug-related overdose deaths in 2012. Just four years later, in 2016, that number had more than tripled to 694 and is on pace to exceed 1,000 deaths by the end of this year. O’Brien said that, whereas nearly none of the 2012 deaths was caused by fentanyl, by 2016 that drug alone was responsible for almost two-thirds of all overdose deaths.

A law passed in the 2017 Maryland General Assembly requires all institutions of higher learning that receive state funding to establish policies to address opioid addiction and prevention and to train the institution’s police officers to use the anti-overdose drug naloxone to prevent deaths.

Slimmer showed UMB police officers how to properly administer Narcan, which is a form of naloxone delivered via nasal spray. “It’s super simple to use and completely safe,” he told them. “There is no needle, and it’s the only thing in the world that will reduce an opioid overdose.”

The health threat presented by powerful opioids is not just to recreational users, Slimmer added. Officers exposed to drugs they seize are at risk themselves for injury and death.

“Powdery drugs are what we’re truly concerned with right now," he said. "The slightest bit of fentanyl or carfentanil [a synthetic cousin to fentanyl], if it goes airborne, it gets into your respiratory system. It can cause you to go into respiratory arrest and have an overdose.” Officers, he explained, must be prepared to administer Narcan not only to drug users, but also to fellow officers.

Another issue of concern to officers is the potential for liability should anything go wrong when administering Narcan to an overdose victim. Stephanie Suerth with the UMB Office of Accountability and Compliance explained that officers are protected by the Maryland Good Samaritan Law. “The law says the campus police and the designees who are trained to use the product [Narcan] are indemnified for any action for using it,” she said.

After the overdose prevention training, health department officials introduced a second training opportunity for officers, with two BCHD interns briefing officers on the risks and prevention of Zika virus infection. Vernon Stepney and Taylor Owens, students at Baltimore Polytechnic Institute, impressed officers with their knowledge of the subject and presentation skills.

Stepney warned officers not to take lightly the threat of Zika infection. “We do have the mosquito [a. aegypti] in Baltimore, which is why we’re talking to you now about how to prevent it, what kinds of things not to do, and what to do to help prevent the transmission of the Zika virus,” he said. Stepney explained that last year there were more than 5,000 symptomatic Zika cases reported in U.S. states, including 130 in Maryland.

The disease is often difficult to spot, Owens noted. “Most people will not know that they have the Zika virus," she said. "All the symptoms are normal symptoms: red eyes, joint pain, rashes, and fever. You might pass out. You might sweat a lot.”

The officers present were awarded with certificates declaring them Baltimore City Zika ambassadors. “You are the first adults who have been trained to be a Zika ambassador,” Owens told them, adding that, so far, only public school children had received their briefing.