Cardin: BioPark 'A Priority of Our State'

U.S. Sen. Benjamin L. Cardin, JD ‘67, returned to his alma mater, the University of Maryland, Baltimore (UMB), to tour the UM BioPark and host a roundtable discussion with University leaders and biomedical innovators, highlighting such topics as bipartisan solutions to health care policy and ways to encourage small business innovation.

“I always get excited being here,” Cardin said as he kicked off the discussion on Aug. 10. “It does energize me. After what I’ve just gone through this month in the United States Senate, it’s good to be here, to realize there is real life going on in our communities.” 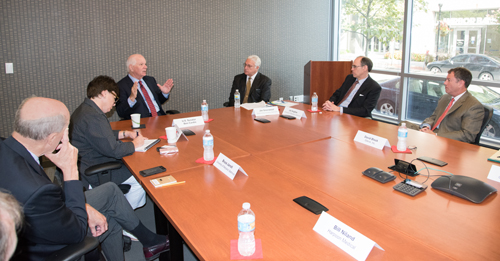 “We can talk about specific issues and you’re going to find that I am going to do everything that I can to make sure that basic research is supported at NIH [National Institutes of Health] and make sure that we have the tools in place to do what you need to do to get trained people,” Cardin said. “But I really do think the most important thing that the United States Congress can do is give you sound policy. … It may not be everything you want, but at least you know the ground rules and you can move forward. I say that because obviously we have just spent several months with an inconclusive health care policy in this country.”

Cardin’s constituents are not unhappy about the price of drugs, Greenwood told the senator. They’re unhappy that it’s coming out of their pockets.

“I recognize the dilemma we have,” Cardin said.

Greenwood emphasized that while technology in the biomedical industry has allowed for great strides to be made in how diseases such as AIDS and cancer are treated, “there are huge unmet needs when you’re talking about Alzheimer’s, autism, diabetes … there’s almost an endless list” of diseases that need additional resources in order for significant progress to be made.

“There is nothing in the science to stop us from doing that and there is no shortage of entrepreneurs who are willing to risk it all and fail and start over again and there is no shortage of investors who are looking to invest in what these companies do, so the potential really is without limits,” Greenwood said. The problem, he added, is that biomedical technology companies have a 90 percent failure rate, and 90 percent of their clinical trials fail.

“Because of that failure rate, investors know if they are going to invest in a biotechnology company it’s going to be high risk, so that requires high yield, high return and that has an impact on growth. There’s no way around it,” Greenwood said.

After the 45-minute discussion, Cardin thanked everyone for their input.

The roundtable discussion took place after a brief tour of the BioPark during which the senator met with leaders of tenants Paragon Bioservices and the Hussman Institute for Autism. The two companies are among 33 emerging, high-growth life science companies and translational research centers housed at the UM BioPark.