Talking about teamwork is one thing; putting it into practice is another. At the University of Maryland, Baltimore (UMB), students from across disciplines were able to do both during activities devoted to interprofessional education (IPE).

(View a video below and a photo gallery on Facebook.)

On April 3, the UMB Center for Interprofessional Education held its seventh annual IPE Day to enhance students’ knowledge of this emerging collaborative team-based movement in health care, law, and social work. Sessions took place at the University of Maryland School of Nursing (UMSON) auditorium and classrooms and in meeting rooms at the Health Sciences and Human Services Library and the Southern Management Corporation Campus Center. 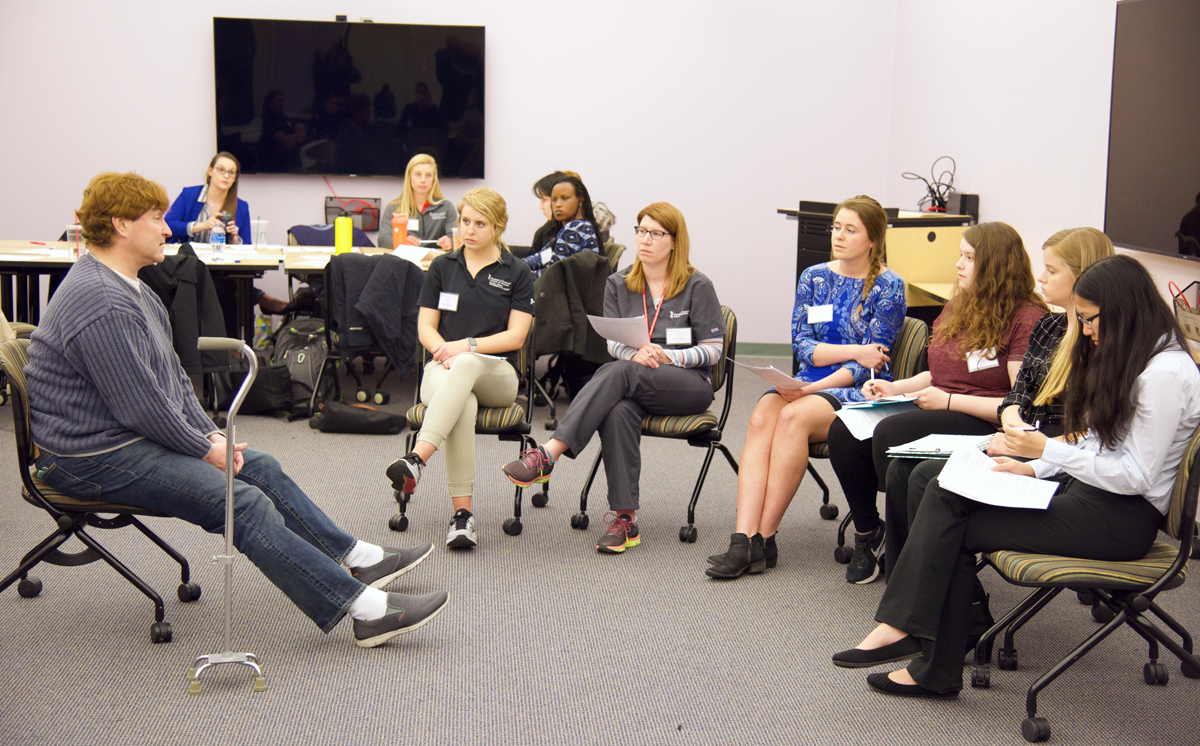 On IPE Day 2019, students practice teamwork across disciplines as they interview a standardized patient who has multiple sclerosis and faces housing and job issues.

All got a warm greeting from UMB President Jay A. Perman, MD, a pediatric gastroenterologist who continues his practice in the weekly President’s Clinic, which includes students from various schools. His clinic partner is UMB assistant vice president Elsie Stines, DNP, MS, CRNP. The pediatric nurse practitioner joined him onstage along with a multidisciplinary panel made up of their colleagues in the clinic, one of its patients, and the child’s parents.

“I appreciate every single person on my team,” Perman said, “but the most important person on the team is the patient.” Think of the patient as the center of the team, he told the audience. “Make sure that the family can do what you’re asking.”

In the case of 19-month-old Claudine, who suffers from a chromosomal abnormality, parents Annaise Mouamba and Samuel Kabwe were challenged in several ways after they brought the infant home from the hospital. Coping with the demands of a gastric feeding tube was “stressful, stressful, stressful,” said Claudine’s mother, who had to leave her job. Without that income, they couldn’t pay all their bills and lost power. The clinic’s team intervened, and the utility restored their service because caring for Claudine’s condition requires electricity.

“I was scared,” said Mouamba. “These are the people who helped us through our journey,” she said, referring to the clinic team as she and her husband expressed their thanks. Their daughter has chromosome 4q deletion, which includes heart problems that cause weakness, which in turn hampers feeding. It’s a complex condition.

Inspired by the playful baby and her parents, the students embarked on their own complex case in what has become a central part of IPE day at UMB. Mentored by faculty members, participants broke into small groups in which they interacted with one another while pondering the care of a standardized patient. On this day, they addressed the case of Morgan Showalter, a multiple sclerosis patient who faces housing and job issues.

Among their goals were to discover how to effectively work and communicate with professionals outside of their areas of study, which specialist skills they can best share with other professionals, and how interprofessional communication can improve quality of care.

In conclusion, Center for IPE director Jane M. Kirschling, PhD, RN, FAAN, dean of UMSON, led a debriefing in which students were asked to comment on how they had been able “to learn with, from, and about one another.” She also helped field a question about acronyms, or “mumbo-jumbo,” which a good team member is urged to avoid. “ADLs are activities of daily living,” said Kirschling, giving examples such as showering in the morning and fixing lunch. And a CNL, she explained later, is a student with a university degree in a non-nursing field who is earning a Master of Science in Nursing in UMSON’s Clinical Nurse Leader program.

Nabid Ahmed, a third-year-student at the University of Maryland School of Medicine (UMSOM), was among those who spoke. He suggested more information be provided in the future about the curriculum in various disciplines so participants know what their peers are being taught.

“I had a really good experience today,” he said, adding that he had been attracted to IPE Day by the chance to meet people from other schools and “to pick their brains” while working together on a case.

After the give-and-take, students got a chance to continue networking while enjoying a barbecue buffet. And in what has become a tradition of IPE Day, Kirschling and Center for IPE co-director David B. Mallott, MD, associate professor at UMSOM, presided over a raffle. Winners were able to take home gift cards along with their lessons learned.