The opioids addiction crisis in all its complexity was the subject of an unusually personal discussion between residents of Anne Arundel County and a panel of experts from the University of Maryland, Baltimore (UMB) led by President Jay A. Perman, MD. The panel members described the University’s efforts to bring science to a field in which evidence-based practices are often lacking.

Perman was joined at Homestead Gardens on April 18 by the deans of the schools of social work and pharmacy and by a researcher who has made the search for a non-addictive opioid his life’s work, having been funded for 18 years in a row by the National Institute on Drug Abuse (NIDA) or other institutes at the National Institutes of Health. (See video below.) 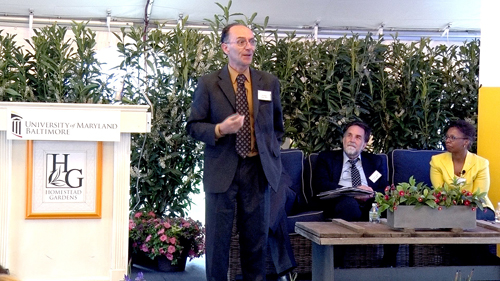 “No mean feat,” Perman said, referring to NIDA’s long-running support of Andrew Coop, PhD, professor in the Department of Pharmaceutical Sciences and associate dean for academic affairs at the University of Maryland School of Pharmacy (UMSOP). Coop discovered the compound UMB 425, an opioid painkiller with the potential for no abuse liability.

But the ultimate feat is one facing scientists, academic leaders, and community members alike: overcoming a multifaceted opioids addiction crisis with no easy solutions. It took the lives of 1,501 Marylanders over the first three quarters of 2017, amounting to four opioid overdose deaths a day. The toll is nearly double what the state experienced just two years earlier, Perman told the group.

As Marylanders ranging from the governor and lieutenant governor to ordinary citizens have responded to the crisis, the president of Homestead Gardens, Inc., said he is among those taking action. Brian Riddle mentioned his work through Leadership Anne Arundel on a committee addressing opioids misuse, saying his concern is among the reasons he had been eager to host the UMB panel.

The garden center venue in Davidsonville, Md., was abloom with plants. Participants gathered in a tent that was open to the sounds of evening in the countryside, including the bleat of a goat.

The bucolic setting contributed to a sense of intimacy in which nearly every hand went up when Perman asked how many people had been personally affected or knew someone impacted by substance use disorders.

“I think this is important,” Perman responded. “I think we need to see each other in order to see the crisis for what it is, how pervasive, how indiscriminate. Raising our hands together,” he continued, “because we’re not going to get anywhere if we don’t erase the stigma associated with addiction.”

Richard P. Barth, PhD, MSW, began his remarks by stating, “I, like many of you, have been deeply affected by the addiction of someone I love, in this case, my son.” He described his family’s struggle to help his son in matters as basic as safe housing.

Barth then moved beyond his role as a parent to that as dean and professor of the University of Maryland School of Social Work (UMSSW) and the establishment of a UMB-wide Center for Addiction Research Education, and Services (CARES), in collaboration with the UMSOP. The center is intended to bring science to substance use disorder services and care.

In this work, Barth said, “I see the chance to interrupt the path to addiction.”

Fewer than 11 percent of individuals in need of treatment for their substance use disorders receive it in a given year, he said. “Internal networks of mutual help and family and community support systems play the most central part in helping to fill this treatment gap. But these informal networks, many of which you may have belonged to and which I have belonged to, are insufficient.”

Like people with other chronic diseases, he said, these individuals should be afforded care guided not only by dedication and concern but also evidence-based approaches known to improve outcomes. The latter includes medication-assisted treatment. “We’re also trying to understand how the ordering and timing of various services matter,” he said, displaying a slide depicting comings and goings from the emergency room and other treatment options. The resulting flow chart is so confusing that Barth compared it to an impressionist painting.

Natalie D. Eddington, PhD, FAAPS, FCP, dean of the UMSOP and a professor of pharmaceutical sciences, said that CARES has four areas of focus that tap into the outstanding skills sets in each school at UMB. The core areas are:

· Development of innovative models and systems of care

In these endeavors, she said, the center reaches across disciplines to take advantage of the interprofessional nature of UMB. As an example, she said, one proposal is for clinics that would treat people who suffer simultaneously from a substance use disorder and a chronic disease such as hepatitis C, providing care in a comprehensive manner.

“Those are the kinds of things that can help in terms of the crisis we’re in and meeting the needs of patients where they are,” Eddington said.

In the area of translational research, Coop is immersed in bringing UMB 425 out of the lab and to the bedside. Nearly two decades ago, he said he told himself: “We need a better version of morphine.”

As Perman and Coop told their listeners, the researcher refuses to use the term addiction because it’s too imprecise and is associated with a stigma that is counterproductive. Instead, Coop speaks of the mechanisms of disease. A substance is “reinforcing” if a person takes it to get high. If a user is motivated by avoiding withdrawal symptoms, perhaps after being given a painkiller because of surgery, the term is “dependent.”

As for his compound, Coop told the group, “The dependence in animals is solved.” But not yet the reinforcing aspect.

“I’m working on it,” he said to applause.

In a question-and-answer session that followed, comments ranged from workforce advice sought by the owner of a small business to an observation about unfettered sales of controlled substances online.

In response to a question about the peer-helping approach, Barth characterized it as a weak intervention that is backed by almost no science. He noted that, in a change in Maryland, sober-living homes are required to offer medication-assisted treatment. “You can’t say, ‘Everyone has to be abstinent from medication here.’”

Lisa Hillman, author of Secret No More: A True Story of Hope for Parents with an Addicted Child, countered: “If there were people here who got through that 12-step program that got them clean, that keeps them clean, they would probably argue with you.”

“They would,” Barth agreed.

Perman told the group that UMB’s seven schools are absolutely committed to working together in its comprehensive program to address opioid addiction. Besides pharmacy and social work, which are taking an executive role in CARES, the others engaged in its core work are the UM School of Dentistry, the Francis King Carey School of Law, the UM School of Medicine, the UM School of Nursing, and the Graduate School.

Joining Perman and members of the panel at Homestead Gardens were representatives of the UMB Office of Philanthropy, which oversees the Catalyst campaign. It supports the University's Big Ideas — bold, interdisciplinary projects that meet a series of goals. First on the list: End the epidemic of addiction.