“There’s no barbed wire on the other side of Martin Luther King Boulevard, but there might as well be,” said writer and television producer David Simon, explaining his view that economic segregation is one of the underlying problems Baltimore must solve in order to reduce drug-related crime and violence.

Simon addressed a gathering of University of Maryland, Baltimore (UMB) alumni Sunday, April 22, at the Sagamore Pendry Hotel in Fells Point. UMB President Jay A. Perman, MD, invited him to talk about his work as a journalist and television producer, and how that work was influenced by the city. Simon worked on The Baltimore Sun city desk for 12 years, during which time he wrote Homicide: A Year on the Killing Streets. The book was fictionalized as the TV drama Homicide: Life on the Street. He later served as creator, executive producer, and writer of the HBO series The Wire. Both series focused on life and crime in Baltimore. 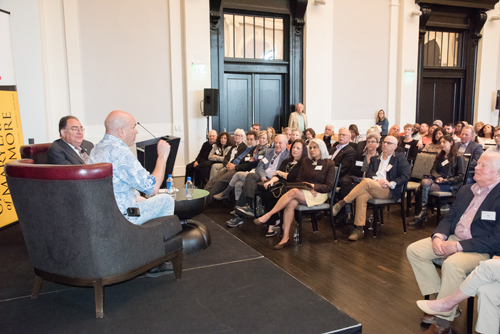 “You know, I probably shouldn’t acknowledge this, but when I wrote to the community and told them we were lucky enough to have you speak to us, I got a nasty email from somebody on campus,” Perman told Simon, sitting beside him on stage. There are some, he added, who blame Simon and his shows for damaging Baltimore’s reputation around the country. “Why are we giving a platform to David Simon?” Perman said, relating another writer’s complaint.

The question was not a new one for the writer, who quickly responded, “There are 794 stories about the America that got out (of post-industrial dislocation) and somebody made a drama about the people who got left behind in the places where factories closed, places where the only economic energy left in some of these neighborhoods is the drug trade, and that’s one too many?” A swell of applause indicated that few if any critics were in the audience.

Perman noted that Simon clearly has affection for Baltimore. Although born in Washington, D.C., and raised in its suburbs, Simon and his wife own a home in Baltimore and their child attends public school in the city.

Simon agreed. “If you watched The Wire, unless you’re with the chamber of commerce or a realtor,” he said over the audience’s laughter, “I think if you watched it for the human beings that were on screen and how they felt about things and how they respond ... I don’t think you could have missed it, but there are some people who did.”

Simon added that part of Charm City’s charm is its tenacious sense of pride. “I was shocked that some people watched The Wire and said, ‘Why don’t they just leave?’ No! We’re from Baltimore!” he said, adding, “There’s a sense of we’ve got things right even if the rest of the country’s moved on.”

Most of the nearly 90-minute talk, however, focused on the things Simon thinks Baltimore doesn’t have right, an economy that excludes “whole parts of our city” and a police department that he says is mistakenly focused on arresting non-violent offenders instead of reducing violent crime.

“Locking up a hundred thousand people a year in a city of 620,000? This is insanity,” Simon said, calling the Baltimore Police Department “the legacy of (former Baltimore mayor) Martin O’Malley.” By increasing arrest stats, the police department looked effective on paper, he argued, but its culture changed, making it less effective at solving violent crimes and exacerbating the city’s most fundamental problems.

“So, they can arrest everybody in the world … and give them a criminal history that will make them unemployable for the rest of their lives on non-violent, nonsense arrests, but when somebody shoots someone else, they can’t solve the crime,” he said. “Until you fix the police department, all you’re doing is damaging families, communities, and giving 15-year-old kids adult records.”

Toward the end of the talk, the audience got a chance to take over the questioning from moderator Perman. Answering a law professor’s question about the commercialization of the justice system, Simon lamented, “There’s so much money to be made by human misery. Whenever the criminal justice system ratchets itself up and declares war on the world deserving incarceration or prosecution or enforcement, money is being made.”

Another audience member, a School of Medicine alumna, took the opportunity to express sadness that The Wire never returned for a sixth season. “I used to watch The Wire with my husband and tell him Bubbles (a homeless character in the show) is my patient. I loved how authentic and honest it was, unlike anything else,” she said.

Wrapping up the evening, Perman turned to Simon. “A couple of weeks ago I found myself addressing the Downtown Partnership,” he began. “I said, ‘Let’s be sure to tell the good stories in Baltimore, too.’ I would say that you are one of Baltimore’s good stories, and we are fortunate for it.”