“We asked our downtown employers why they chose to locate here,” he told several hundred representatives of member organizations at the Hyatt Regency Hotel on April 5. “Resoundingly, the answer was that businesses are here because this is where the best and brightest employees want to be.” 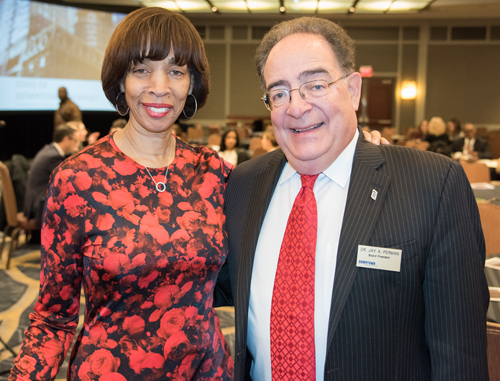 Home to one-fifth of Baltimore’s 611,000 residents, the downtown area includes the University of Maryland, Baltimore, as well as communities as far north as Mount Vernon, as far west as Pigtown, as far east as Canton, and as far south as Locust Point.

Despite rapid expansion of housing downtown, there is room to grow, Perman told the audience. The DPOB’s recently released Housing Demand Study shows the area can accommodate another 7,000 new housing units over the next five years. Two major developments, 500 Park Avenue and 10 Light Street, have increased occupancy to 96 percent and nearly 100 percent, respectively.

“Let’s be honest, whether we’re talking about attracting new restaurants or new companies, Baltimore’s reputation has taken some hits over the past few years,” Perman admitted. “And that means we all have to work harder and smarter to attract jobs, investment, and residents. The data in this year’s State of Downtown Report shows that we have a lot to work with: a strong base of jobs, a growing residential population, good tourist visitation, and hundreds of millions of dollars in investment.”

The full State of Downtown Baltimore Report may be found at GoDowntownBaltimore.com.