President Jay A. Perman, MD, described a successful focus on technology transfer at the University of Maryland, Baltimore (UMB) as he joined state officials and representatives of federal laboratories and private industry at the 2018 Maryland Technology Transfer Summit.

Maryland Gov. Larry Hogan gave the keynote address at the summit, which was held April 20 and attended by Sen. Benjamin Cardin and Sen. Chris Van Hollen of Maryland and by Maryland Commerce Secretary Mike Gill, who conducted the senators’ panel discussion. 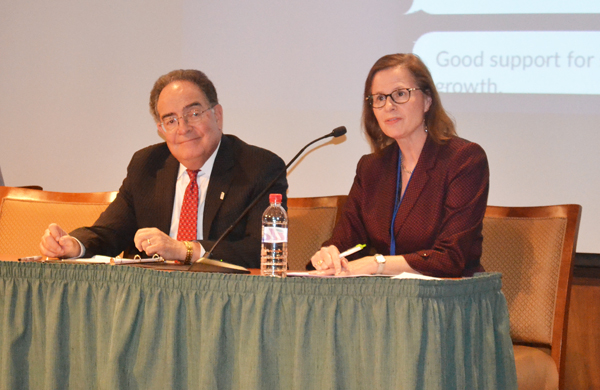 “Maryland truly is open for business, and much of our success begins with all of you in our tech sector,” Hogan told a large audience gathered in an auditorium at the National Institute of Standards and Technology (NIST) in Gaithersburg, Md.

The governor described “a thriving startup ecosystem” as a significant asset and praised the University System of Maryland and Johns Hopkins University, “whose leaders understand the importance of technology transfer to industry.”

Perman, who appeared on an academic panel, said that technology licenses have doubled, licensing revenue has tripled, and the number of startups created has tripled over the past four years at UMB. He attributed much of the success to UM Ventures, which is UMB’s tech transfer partnership with the University of Maryland, College Park (UMCP).

“Since UMB and College Park started working together through UM Ventures,” he said, “we’ve seen such an acceleration of our tech transfer efforts, and we’ve seen investors much more willing to jump in. So I think there’s merit to creating a larger Maryland consortium focusing on commercializing therapeutics and medical devices.”

The latter refers to closing the gap between academic research and technology development and the stage at which companies and venture capitalists are ready to invest in the technology.

In Maryland through UM Ventures, “we’re adding resources to further de-risk and advance our most promising technologies,” he said. “Plus, we’re building interdisciplinary teams spanning both universities that are working on medical devices and health informatics.”

The academic panel was moderated by Laurie E. Locascio, PhD, vice president for research at UMCP. Together UMCP and UMB are collaborating through an initiative established and funded by the state legislature called the University of Maryland Strategic Partnership: MPowering the State.

Perman mentioned TEDCO’s Maryland Innovation Initiative and the Maryland Industrial Partnerships Program as helping universities to bridge the gap between the research and investment stages. During a question-and-answer session, he also noted the role of students who are eager to become entrepreneurs. He said the development of resources such as UMB’s The Grid are ways to help them and their institutions meet that goal.

Also speaking were Maryland Commerce Deputy Secretary Benjamin Wu, JD; U.S. Under Secretary of Commerce for Standards and Technology and NIST director Walter Copan, PhD; and 10 representatives of federal laboratories located in Maryland such as NIST and the Science and Engineering Lab at the Food and Drug Administration.