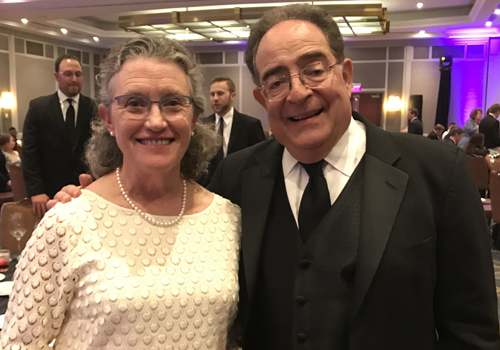 It was presented to him April 14 at the Paul’s Place 35th Anniversary Gala at the Hyatt Regency Baltimore by gala co-chair Stephen N. Davis, MBBS, FRCP, FACE, MACP, the Dr. Theodore E. Woodward Professor of Medicine and chairman of the Department of Medicine at the University of Maryland School of Medicine (UMSOM). (View a photo gallery.)

Paul’s Place receives a “wonderful and quite incredible slate of candidates” who want to be considered for the award, Davis said before presenting the honor to Perman. “But there was one individual that emerged as the inspirational leader. The person that has made such big differences to Baltimore and West Baltimore, and it is no surprise that is Dr. Jay Perman.

“Every day, he makes a difference. Everything he touches, everything that he’s involved with, he just makes it better and better and better," continued Davis, director of the General Clinical Research Center and the Clinical and Translational Sciences Institute.

In a video of highlights shown to gala attendees, Perman spoke about the importance of UMB partnering with Paul’s Place over the years. Through Perman’s leadership, long-standing partnerships have been established between the Pigtown nonprofit organization and the University of Maryland schools of nursing, social work and medicine, as well as the University of Maryland Francis King Carey School of Law.

“I’m very humbled to be selected … to receive this award,” Perman said as he accepted the honor. “As I said in the video, I accept this award on behalf of my colleagues who really do the important work … our faculty … our staff … and our students, who pay to be at the University of Maryland, Baltimore, and yet find the time to do these important things in the community.

“Our partnership with Paul’s Place is special. We do some things that Paul’s Place appreciates and, as I said, Paul’s Place becomes a venue where our students can learn.”

Perman recounted a story of meeting an 8-year-old boy, Xavier, at an event at Lexington Market several years ago. He asked the boy what he wanted to do when he grew up. Xavier replied that he wanted to play in the NBA or NFL.

“He could see on my face that I was not quite convinced. On a dime, he turned and said, ‘Or maybe I’ll have your job,’ ” Perman recalled as the audience roared with laughter. “You know, I laughed, too, not at him, but with him. But you know what? I have thought about what Xavier said to me virtually every day since. Between Xavier in West Baltimore and my job are a thousand obstacles, and it is our, if I may, collective responsibility to do whatever we can to remove as many of those obstacles as possible so Xavier has a crack at my job. And that is what this evening is about.”

“Paul's Place is honored to award Dr. Perman with the 2018 Commitment to Community Award,” McLennan said. "We are a stronger organization due to key partnerships like the University of Maryland, Baltimore.”

“The School of Nursing has a long history with Paul’s Place in terms of working with the residents of West Baltimore and trying to provide them with health care and with support as they navigate their daily lives,” Kirschling said. UMSON operates a nurse’s clinic at Paul’s Place, providing case management and other health services to residents.

Stines said Perman deserved the recognition because improving the lives of children and families is important to him.

“Although we will often see all the wonderful efforts and initiatives he supports, there is so much more that he does that people don’t even know. He is humble and does not want the recognition,” Stines said.

She recalled a story about a middle school student she met who wasn’t sure what he wanted to do in life but said it was important for him to graduate from high school and attend college so he could help his sister and mother move to a better neighborhood.

The boy told Stines, “I would love to meet President Perman.” She passed his request on to the University president.

“Most presidents would probably think that was nice. What did Dr. Perman do? He said, ‘Invite him over to my office, and we will have lunch together. I will excite and encourage him to fulfill his dreams,’ ” Stines said.

The afternoon lunch meeting of the boy and Perman is just one of many examples of how “Dr. Perman goes above and beyond,” Stines said. “Working alongside Dr. Perman, I have learned how to be a better nurse practitioner and the importance of giving back without needing the recognition.”