A Path to Success for Maryland’s Working Poor

Although Maryland has one of the nation’s lowest poverty rates – about 10 percent – more than a third of Maryland families struggle just the meet life’s basic needs. In January, the United Way of Central Maryland released a report that delved into the complex issues and struggles facing these so-called ALICE families.

The acronym stands for Asset Limited, Income Constrained, Employed. They earn too much to receive government assistance, but not enough to consistently meet needs like housing, health care and transportation. For example, the report says a family of four with two adults and two children would need to earn just over $60,000 a year to reach the upper end of the ALICE level. 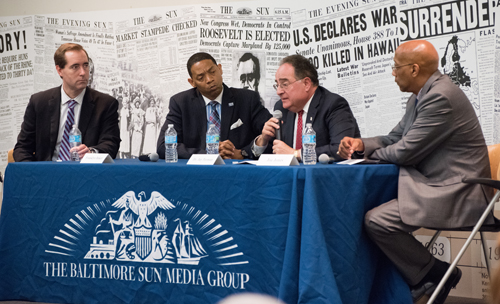 On Apr. 26, University of Maryland, Baltimore (UMB) President Jay A. Perman, MD, joined two other community leaders to discuss the ALICE report and to share perspectives and ideas to improve the lives of ALICE families. Joining Perman were United Way of Central Maryland President and CEO Franklyn Baker, and Center for Urban Families founder and CEO Joe Jones.

Moderator Andrew Green, Sun editorial page editor, asked Perman about the barriers facing low wage earners who seek better paying jobs. “The barriers are considerable,” Perman said. “We want our neighbors in West Baltimore to have jobs and to that end we’ve established a street-level community engagement center in the Poppleton area (in the University of Maryland BioPark).” Perman described some of the programs designed to assist community members, such as Workforce Wednesdays, where UMB human resource representatives help connect residents with open positions at the University and in other nearby agencies. “We’ve helped over the 18 or so months that we’ve been there more than 200 people,” he said.

Panelists agreed that the availability of higher paying jobs is only one part of a larger problem. “The jobs that we want to make available to our neighbors -unfortunately those who we want to help the most in order to move up - they don’t have the skills for them,” Perman said. “In my opinion the only way we’re going to overcome these barriers is to look at the long view and get the kids in our neighborhoods educated so that they qualify for the jobs that are better paying.”

Perman also addressed the role that health and environment play in the difficult lives of ALICE families, but in the end returned to one thing. “In the final analysis, if we get the children in our community who have all the potential in the world educated, everything else will take care of itself.”

The Baltimore Sun’s write-up of last night’s event, including a short video, can be seen here.