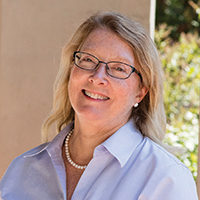 Professor and Chair
Department of Pharmacology
School of Medicine

Margaret “Peg” McCarthy received a PhD from the Institute of Animal Behavior at Rutgers University, postdoctoral training at Rockefeller University, and was a National Research Council Fellow at the National Institutes of Health before joining the faculty of the University of Maryland School of Medicine in 1993. She was a professor in the Department of Physiology before becoming chair of the Department of Pharmacology in 2011.

She has received numerous awards and recognition for her research and mentoring of graduate students. McCarthy has a long-standing interest in the cellular mechanisms establishing sex differences in the brain. She uses a combined behavioral and mechanistic approach in the laboratory rat to understand both normal brain development and how these processes might go selectively awry in males versus females.

The University of Maryland, Baltimore’s Researcher of the Year in 2015, she is currently president of the Organization for the Study of Sex Differences, associate editor at Hormones and Behavior and on the advisory board of eNeuro. She also serves on the Board of Scientific Councilors of the National Institute of Mental Health and was named one of Maryland’s Top 100 Women in 2009.