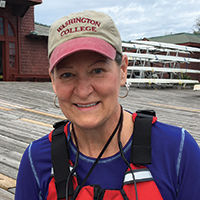 A longtime TV producer and on-air talent in community affairs programming for New Hampshire, Carolyn Choate recently left the industry to write full-time while continuing to serve as an ambassador for breast cancer survivorship. She was diagnosed in 2003 at 45 with little hope of celebrating her 48th birthday. She credits the aromatase inhibitor for saving her life.

Forced to withdraw from graduate school following her first mastectomy and during treatment, Choate received her master’s in comparative literature and writing in 2006 and vowed that if she survived she would rewrite the great Western epics from a feminine perspective as a legacy for her daughters, Sydney, 15, and MacKenzie, 12.

Following a second, prophylactic mastectomy, Choate began writing about her cancer experience. Her essay, “Good Medicine,” about how … someone’s life’s work helped [her] put one foot in front of other …  was published in Cure magazine.

“Following publication of ‘Good Medicine,’ I was unconsolably stricken with the urge to thank the ‘someone’ who discovered the aromatase inhibitor.” Choate met that researcher, Angela Brodie, PhD, on May 9, 2014, and a deep friendship ensued. Inspired by Brodie, Choate thought better of rewriting the epic tales and decided to relive them instead, hiking solo as Odysseus in Santorini, Greece, 2014, and as Beowulf inDenmark, 2016.

In 2017, Carolyn, 59, and Sydney, 27, kayaked from New Hampshire to Baltimore’s Inner Harbor, raising $40,000 for the Drs. Angela and Harry Brodie Distinguished Professorship in Translational Cancer Research.