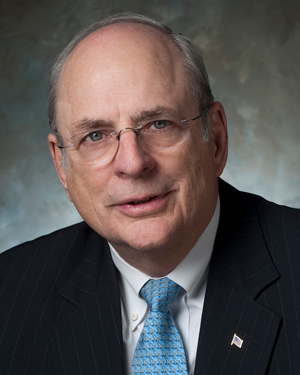 Norman R. Augustine, MSE, is retired chair and CEO of Lockheed Martin Corp. Prior to joining Martin Marietta Corp., he served as assistant secretary of the Army (R&D) from 1973-75 and undersecretary from 1975-77. He was a professor at Princeton, his alma mater, from 1997-99.

Augustine has been presented the National Medal of Technology by the President of the United States and received the Joint Chiefs of Staff Distinguished Public Service Award. Five times he has received the Department of Defense’s highest civilian decoration, the Distinguished Service Medal. He is co-author of The Defense Revolution and Shakespeare in Charge and author of Augustine’s Laws and Augustine’s Travels.

He chaired the committee that wrote the influential 2005 report "Rising Above the Gathering Storm: Energizing and Employing America for a Brighter Economic Future" and then co-authored a follow-up report. A regent of the University System of Maryland for many years, Augustine headed a commission that in 2015 made 32 recommendations to the Maryland General Assembly for how to make the state friendlier to the business community.

He served on the boards of Black & Decker and Procter & Gamble, and has led groups ranging from the American Red Cross to the National Academy of Engineering to the Boy Scouts of America. He is a trustee emeritus of Johns Hopkins and a former board member of Princeton and MIT.

He holds 33 honorary degrees and was selected by Who’s Who in America and the Library of Congress as one of “Fifty Great Americans” on the occasion of Who’s Who’s 50th anniversary. He has traveled in 112 countries and stood on both the North and South Poles of the Earth.

Register for Office Hours with Norm