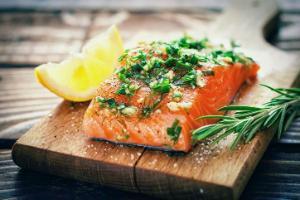 On the heels of the success of our virtual Savory and Sweet Winter Cooking Class and your positive feedback, the University of Maryland, Baltimore (UMB) hosted a spring cooking class featuring light and healthy fare, highlighted by a delicious salmon entree.

Amy von Lange started her professional career in industrial sales but developed a passion for the hospitality industry. After working with chef Jerry Pellegrino at his first restaurant, Corks, in Baltimore’s Federal Hill as a sales and private events manager, she attended culinary school at the International Culinary Center in New York. Amy spent six months in an externship, first at Alma International School of Cuisine in Italy and then cooking at Hotel Villa Igiea in Sicily. Upon returning to Baltimore, she became executive chef at the Admiral Fell Inn in Fells Point, where she was responsible for preparing creative menus and catering everything from weddings to corporate retreats. In 2015, she and Pellegrino reunited to launch Schola cooking school.