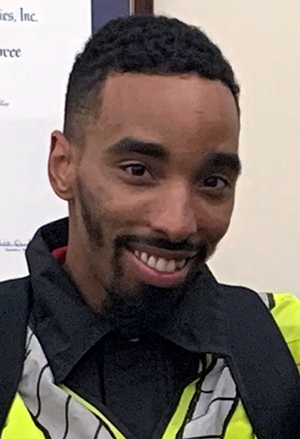 Police Communications Operator (PCO) Ricardo Beasley is new to his role, but not to the University of Maryland, Baltimore Police Department (UMBPD). Beasley has served as a security officer with UMBPD, and, before that, as a security dispatcher at Johns Hopkins Hospital.

“I wanted a chance to advance and find work I would enjoy,” Beasley says when asked why he became a PCO. He says the promotion is his greatest achievement on the job.

Beasley says he enjoys learning more about the UMB community as a PCO. The position requires him to monitor radios, cameras, alarms, and more, while also answering phone calls, arranging Safe Walks and some Safe Rides, dispatching police officers, and much more.

“You have to have excellent communication skills,” Beasley says. “It’s important to stay professional at all times, even under pressure.”

Beasley was 17 when he got his first job at a fast food restaurant. He says the position helped him to develop leadership, communication, and listening skills. In the future, he hopes to continue to work in communications or become a UMB police officer.

Beasley encourages students to stay focused on their dreams. “Put in your best effort to complete your goals!”

When he’s not working, Beasley says he takes care of his other important job — taking care of his son.