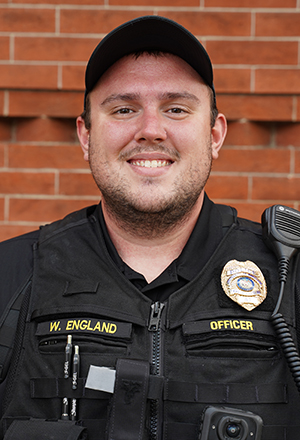 PFC William England may be new to the University of Maryland, Baltimore Police Department (UMBPD), but he comes from a long line of public servants and military members. “I wanted to continue the tradition,” he says. “I want to help those in need.”

England joined the UMBPD last month. Before that, he spent one year as a police officer with the Baltimore Police Department (BPD). In his role there, he helped capture an attempted murder suspect and helped get stolen firearms off the streets. What England likes most about being an officer, though, is working with the community.

“I can help someone on the worst day of their life,” England says. “Helping them resolve their problem and putting a smile on their face — that’s my favorite part of being a police officer.”

His love for the community makes the officer a perfect fit at UMBPD, which is known for its Community Outreach and Support Team (COAST).

England recalls the end of one shift with BPD, when several middle school-aged children approached him in his police cruiser. “They were asking me questions about the job, equipment, and how to become a police officer,” he says. “I made their day when I let them play with the siren and light bar. It was one of the best interactions I ever had as a police officer.”

England knows there are challenges in policing as well. “People don’t really like the police right now,” he acknowledges. It can be a struggle to connect with communities that may have a negative view of police officers, but England says he’s working to change that perception.

“I permanently keep a smile on my face, remain polite, and try to be as helpful and friendly as I can,” he says. “I hope that each positive interaction I have with someone may change their outlook on police.”

Outside of work, England hopes to earn a master’s degree in cybersecurity or security/counterterrorism. The officer encourages UMB’s students to work hard. “Study, study, and study more!” he says. “You're at one of the best universities in the entire world. Make every second here count and accomplish your goals.”

In the future, England hopes to receive advanced training (including in Emergency Management) and eventually become a supervisor. He enjoys going to the gym, bike riding, playing on his PC, playing drums, and cooking.

One fun fact about England? “Despite my last name, I’m mainly Polish, German, and Scottish in heritage. Ironic, I know!”