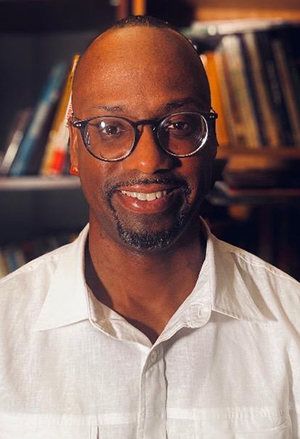 Police Communications Operator (PCO) Stanley Jenkins brings a unique perspective to his role with the University of Maryland, Baltimore Police Department (UMBPD). As a former police officer, he knows what it’s like on both sides of the radio.

“I saw things from the vantage point of a patrol officer, but as a communications officer, my scope of understanding has been broadened,” Jenkins says.

Jenkins became a PCO in February 2017. The position was an extension of his law enforcement career, but also a way to help pay for his family’s educational aspirations. Jenkins himself plans to earn a PhD and teach at a university one day.

Jenkins is widely respected by his peers. PCO Supervisor Shawnta Privette nominated Jenkins to be Spotlight Officer because of his unique perspective as a dispatcher. Jenkins says some of his most memorable moments on the job are interacting with co-workers.

Being a PCO also comes with challenges. Jenkins says PCOs can feel overworked, underpaid, and disrespected. The job is “very stressful, demanding, and sometimes chaotic,” he says. There is an “intense and frenetic pace of the work and demand for calm under pressure. While I haven’t mastered such qualities, I’ve come a long way in their attainment.”

For those new to Baltimore, Jenkins hopes you take the time to learn about the community. “It’s essential to understand that some of the destitution and crime that occurs in and around UMB’s campus does not reflect the general character of any class or race of people,” he says.

Outside of work, Jenkins loves to read, write, spend time with family, exercise, and critically engage with ideas and current events. One fun fact: He is a past president of Morgan State University’s Toastmasters!