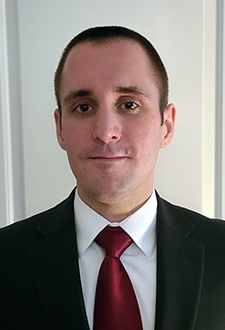 Over the past decade, Ryan McGrath has worked in public safety with the University of Maryland, College Park, and for the past two years as a security officer with the University of Maryland, Baltimore Police Department (UMBPD). His hard work paid off: McGrath is one of three UMBPD security officers who will be attending the Maryland Police and Correctional Training Commissions (MPCTC) Police Academy.

“It’s my greatest achievement so far,” McGrath says. “I’m looking forward to learning new skills I can bring back to the University to better serve our community.”

McGrath has spent the past two years learning the UMB buildings and personnel. Being able to respond quickly and know whom to contact is all part of being a great officer. “My goal is to learn something new every day,” he says. He also hopes UMB community members take the time to meet their fellow colleagues. “I can’t tell you how many times a polite working relationship has proved valuable to not just myself, but others, too.”

Since he was young, McGrath knew he wanted to help others feel safe at school and at work. When he was a child, he could hear gunshots from a nearby street at night. In college, he woke up to someone trying to break into his apartment. The police responded to keep him and his neighbors safe. “I just want to be able to do the same thing for our community,” McGrath says.

As a security officer, McGrath enjoys engaging with the community. Some of his most memorable moments come from offering Safe Walks to UMB community members. “They’re often a very small part of my job, but I know how much those few minutes can matter to our community,” he says. “That’s why I always reassure community members that it’s always OK to request one if they feel unsafe or unsure. We’re there to help everyone feel safe.” Safe Walks can be requested on campus 24/7 by calling 410-706-6882.

One day, McGrath would like to be a K9 handler. For now, he’s just beginning his journey as a police officer. McGrath and the other recruits report to the Police Academy on March 1. They expect to graduate Sept. 1.