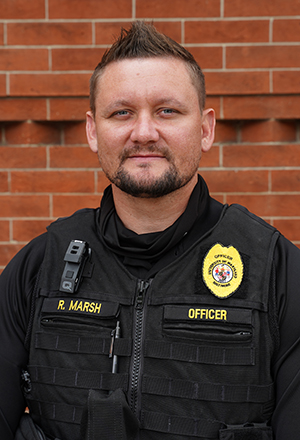 “I want to change the way people think about the police, one person at a time,” Marsh says. He accomplishes that by always looking for opportunities to talk with citizens and make a difference.

Marsh says he was once approached by a man and his 5-year-old son who was interested in policing. “I let him sit in the driver’s seat, play with the lights and sirens,” Marsh says. “It made his day and made me appreciate my job.”

While being a police officer and working with the community can be extremely rewarding, Marsh says the perception of policing in America can also be a challenge. He overcomes that by showing up for work each day and giving his all to help those in the community.

While he’s new to UMBPD, Marsh hopes to learn as much as he can and eventually move up the ranks. Outside of work, he enjoys spending time with family and says he “likes to eat.”