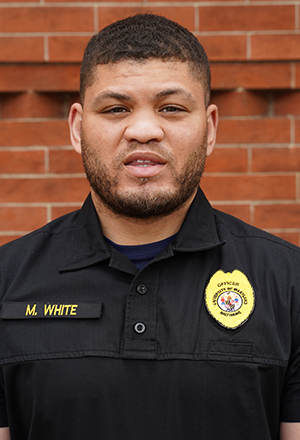 Since he was 14 years old, PFC Michael White wanted to help people. “My first job was with the Baltimore City Summer YouthWorks Program,” he says. “I spent my entire summer helping impoverished communities, serving box lunches, cleaning facilities, and being a camp leader. I learned so many things about myself and Baltimore City at a young age, and it instilled the core values in me to be a public servant.”

“I apprehended an armed robbery suspect who just finished robbing a victim at gunpoint at the ATM,” White remembers. “We recovered a loaded semi-automatic handgun.”

Law enforcement is constantly evolving and changing. White says those changes require him to learn new policies and procedures, command structure, and social issues. “Over the years, I’ve learned to mentally block out the things I can't control and focus on myself,” White says. He does that by exercising, spending time with friends and family, and going to school. White’s goal is to graduate with a major in nursing!

For students at UMB, White wants you to know that he and his colleagues are here to help. “Don’t hesitate to call the UMBPD, no matter what the issue is. We’re here to help you!" says White. He also shared some safety tips: “Don’t leave your belongings unattended. Recheck your desk area before leaving. Lock your car doors. Don’t leave change or phone wires in your car to prevent a beak-in.”

Outside of work, White likes to play sports, exercise, hike, play chess, go to amusement parks, and travel. White also is an avid Ravens fan! “Before a Ravens game, I do the Ray Lewis dance!”