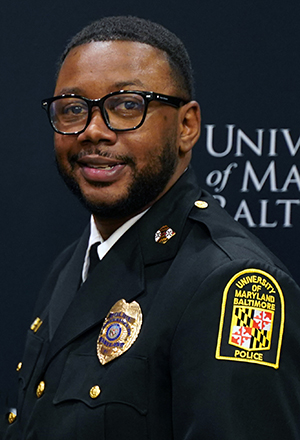 Kevin Anderson is the first member of the University of Maryland, Baltimore Police Department (UMBPD) with two Officer Spotlights (read the first here!). That’s because Anderson joined the department as a security officer and now, after completing the police academy, is a UMBPD police officer.

Anderson has been with UMBPD for nearly seven years but has served as a police officer for just two months. “I became an officer to do something bigger than myself — to help those who don’t know how or where to find the resources to get the help they need,” Anderson says.

During his time at UMBPD, Anderson has enjoyed serving the community. He says his most memorable moment on the job was helping an older community member cross a busy street.

“My favorite part of being an officer is being able to assist those in need and to put smiles on the faces of everyone in our community,” Anderson says. He takes pride in his work and once helped save a woman who was unconscious and not breathing.

Like many officers in UMBPD, Anderson is working to change the negative perception of police. “People think police are just here to make an arrest or to abuse our power,” he says. “That’s far from the truth!”

Anderson says he understands why community members may not trust the police, and he is working to build that trust. “We can help turn around people’s negative perception when we treat everyone as a human being first and truly listen to everyone we come into contact with.”

For students and employees, Anderson recommends being aware of your surroundings and using our Safe Walk and Safe Ride services. He says don’t be afraid to stop him on the street! “I am a really nice and approachable person,” he says. “So if you see me in the community, don’t be afraid to say hi!”