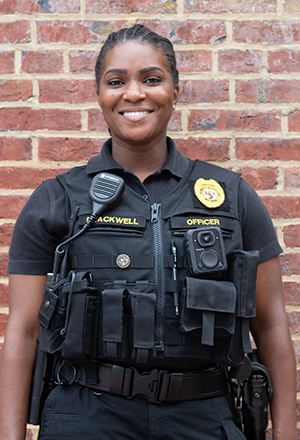 Kelli Blackwell has had a lot of titles during her 11 years and 4 months with the University of Maryland, Baltimore Police Department (UMBPD): Police First Class (PFC), member of the Community Outreach and Support Team (COAST), comfort K9 handler, Police Athletic/Activities League (PAL) mentor. Now, she has a new one: sergeant.

Blackwell has spent her entire career with UMBPD. “My dad was a police officer and I have always admired and looked up to him, so I wanted to be just like him when I grew up," she says. In fact, Blackwell started her career with UMBPD working side-by-side with her dad. The pair worked the same rotation for seven years, and she says it helped to build a greater bond between them.

When she joined the department, Blackwell says she struggled with maintaining a work/life balance. “Sometimes we see and experience things that affect us long after clocking out,” she says. “It took some time for me to learn to leave work at work.” Blackwell leaned on her dad. She saw how he decompressed after a long day and made adjustments. “He played a major role in helping me find a balance so I wouldn’t let the job consume me.”

Blackwell did just that. She joined COAST and became a PAL mentor, which she says is her greatest achievement.

“I always had great mentors growing up, and I always wanted to influence young people’s lives in the same way that so many people influenced mine,” Blackwell says. “I love spending time with my PAL kids and helping them to become positive and productive people within their schools and communities.”

As a police officer, no two days are ever the same. Blackwell says that’s her favorite part of the job. “You never know what the day holds for you as an officer, the people you may meet, the difference you might make in someone’s life,” she says. “I enjoy knowing that each day on the job I can help make someone’s day a little better.”

Right now, Blackwell is focused on mastering her new role as sergeant. In the next five years, she hopes to continue to climb the promotional ladder and complete her college degree.

Outside of work, Blackwell enjoys spending time with her family, traveling, eating at new restaurants, and reading. She also has an identical twin sister! “No, she’s not a police officer,” Blackwell says with a laugh.