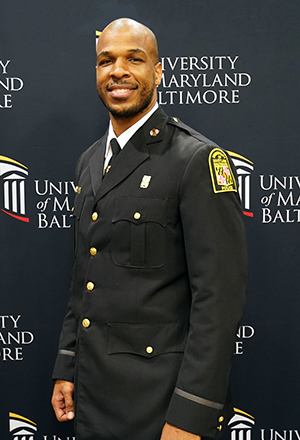 “I chose to become a police officer because I felt my size and great communication skills would transition well into this field of work,” Forney says. (How tall is he? 6 feet 7!)

During his six months in the police academy, Forney’s most memorable moment was a simulation of carrying an injured person on a stretcher. “We were on a nature walk through mud, crossing a river, getting soaked, and carrying this heavy body bag,” Forney says.

New police officers work with field training officers who provide guidance and support. Forney is currently working toward 240 hours of field training with Cpl. Joseph Fair. While Forney is still learning, he is excited for his new role.

“My favorite part of being a police officer is knowing that my efforts could impact my community in a positive way,” Forney says. He encourages students to stay focused and enjoy their time at UMB.

Outside of work, Forney likes spending time with his friends or significant other, watching anime, and playing video games.