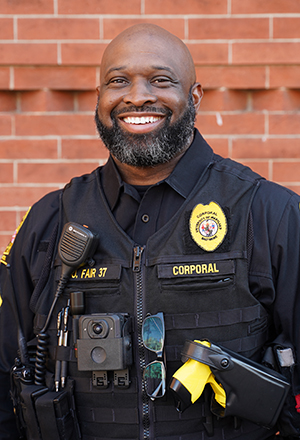 “I never had the desire to become a police officer,” Fair says. “While working for a nonprofit in 2007, several of my co-workers told me I was in the wrong profession because I’m a people person. Plus, I looked the part of a police officer!”

Now with eight years on the job, Fair says his favorite part of being an officer is helping the community feel safe. “When you arrive on a call and the person knows they’re safe — that’s the best feeling.”

During his time with the Baltimore City Schools Police Department, Fair won a medal of honor for stopping a potential school shooting. In another instance, Fair said someone he arrested came back to thank him. “He said it made him reflect and helped him to change his life,” says Fair, who says that is his most memorable moment on the job.

Being a police officer also comes with challenges. “People look at us like we’re robots and not human beings,” Fair says. He works to humanize the profession and build positive relationships with the communities he serves. He loves serving the Baltimore community. “It’s a beautiful city, and it’s making a comeback!”

Fair hopes to earn a degree and increase his networking abilities. He also hopes to gain insight and experience that will help him in the future.

In his free time, Fair likes to spend time with family and “get my hands dirty planting flowers or plants.” Fair also is an avid half-marathon runner. He once ran 16 miles in one day and has 60 medals “and counting!”