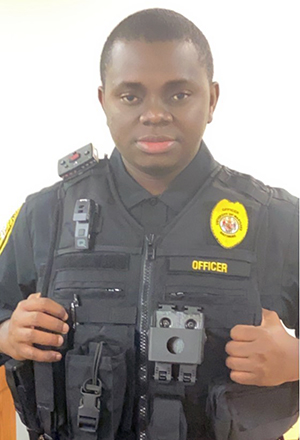 PFC Henry Fullah is one of the University of Maryland, Baltimore Police Department’s (UMBPD) newest hires. He has been a police officer for almost two years, starting at the Prince George’s County Department of Corrections.

“Getting hired by the UMBPD is one of the greatest achievements I have achieved so far,” Fullah says. Since joining the department, Fullah says he has had great experiences with his colleagues and the community. “The people here are awesome. They are ready to help you with whatever you need.” Fullah says his most memorable moment at UMBPD so far was introducing himself at roll call on his first day on duty.

Fullah decided to become a police officer so he could help his community, save lives, and protect the defenseless. “I want to make a difference in someone’s life,” he says. While working with vulnerable populations can be challenging, Fullah says it’s a great experience for him. “I like to take my time and be very patient,” he says. “I treat everyone the same — with ultimate respect, no matter what.”

As a new employee at UMB, Fullah also says he enjoys working with students and employees who come to UMB from all over the world. “It’s good to get to know different cultures and backgrounds as a police officer,” he says. “I hope our UMB community will take advantage of all the resources the University has to offer. The UMB police and security officers are always here for your safety.”

Outside of work, Fullah likes to spend time with family and play video games with friends. In the future, he hopes to graduate from college next year and go on to earn a master’s degree at UMB. Fullah says he also hopes to one day be a sergeant at UMBPD and work his way up through the ranks.