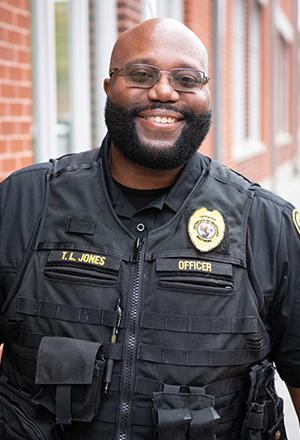 Ever since Pfc. Tremell Jones saw Lethal Weapon, he knew he wanted to be a police officer. “It was my childhood dream,” he says. Now in his sixth year with the University of Maryland Baltimore Police Department (UMBPD), Jones is living that dream.

Jones enjoys working with his squad in patrol and ensuring that he and his fellow officers make it home safely. He’s seen a lot during his time with UMBPD, including working during the Baltimore civil unrest in April 2015. Changing laws and policies can be a challenge on the job, Jones says.

“You overcome that by understanding that you can’t control everything that’s put in front of you and you do your best with what you've got,” Jones says. “Just like playing a card game, you play the hand you are dealt.”

In August, Jones and other UMBPD personnel received commendations from Chief Alice K. Cary, MS, for providing CPR and using an Automatic External Defibrillator on a person who was unconscious and not breathing. Because of his quick actions, Jones helped save the person’s life, Cary says.

As a university police officer, Jones especially enjoys talking with students from different parts of the world. He encourages students to be aware of their surroundings but also to have fun and complete their education.

In his free time, Jones like to watch movies, play basketball, and “be stress-free.”