She’s a Big Help in a Little Package 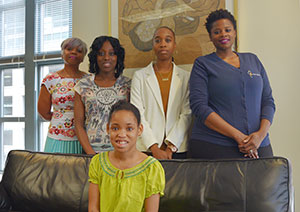 The person who first said “good things come in small packages” surely had Mikeia Jones in mind. Described by her father as his “68-pound chicken wing,” tiny Mikeia has made a huge impact on the School of Medicine’s Department of Neurology since coming there as an intern in January 2015.

Today, she is a paid, part-time office assistant and a shining example of the benefits of the Project SEARCH program, which offers Baltimore public high school seniors with intellectual and developmental disabilities the opportunity to explore careers and acquire real-life job skills by working at a business.

Mikeia participated in three 10-week, unpaid internship rotations through Project SEARCH. The first was with the Department of Rehabilitation with the University of Maryland Medical Center. The second brought her to the Department of Neurology, which kept her for an additional rotation. That is rare, says Tameka Harry, manager for Project SEARCH Baltimore.

“Usually interns rotate; they don’t stay,” says Harry. “The first rotation in Neurology she sorted mail. Then when they saw how fast she picked things up they gave her more independent duties on her third overall rotation.”

The department hired Mikeia the day after her third internship ended. Staying was fine with Mikeia, now 22. Actually more than fine. Asked if she likes being in the Department of Neurology, she says, “I love being here.”

And those in the department love having her.

“When we met Mikeia, her enthusiasm to learn new things and do a good job was absolutely delightful,” says Denise Landrum, administrative support manager. “We came up with a list of very important and necessary tasks that have not been simplified for her at all. Mikeia independently performs these tasks flawlessly, increasing department productivity and lowering costs.”

“Mikeia is a breath of fresh air,” adds Javonia Harden, who works beside Mikeia as clinic coordinator and arranges her daily tasks in a folder. “She definitely took a workload off of me. And I don’t have to worry about if the work is being done correctly.”

Mikeia’s duties include general clerical duties including photocopying, scanning, and faxing notes, letters, prescriptions, and test results. Then there’s the favorite part of her job — sorting and delivering mail to various departments. “I send the mail out and make sure it goes downstairs by a certain time,” Mikeia says proudly.

She also is proud to show off the mail sorting system she has developed in the department — rows of neat, square, gray, wooden cubbyholes with names printed on the side.

“Mikeia talks about the doctors’ names and not just the easy ones,” says her father, Christopher Jones. “She can tell me at least 12 doctors’ names in that building, first and last names. It’s amazing she can remember all that. I’ll say how was work and she’ll say ‘Daddy’ and go on to tell me not about 10 minutes of work but about her whole four-hour workday. She loves it and I’m so happy for her and I thank God for all the people there.”

Not that he didn’t have some initial doubts.

“Downtown is really big and for a person that small she is like a grain of salt down there at the University,” Jones said of his fears when the Project SEARCH internship was first discussed while Mikeia was a student at George McMechen High School. “I feel like I’m letting my kitten go out somewhere and I have to watch it. Miss Tameka and others told me she was going to be fine down there and they were right. I trusted them and I believed in them and they came through. My daughter is so happy. She learns something new every day there.”

Mikeia arranges her transportation with MTA Mobility, which picks her up and drops her off for her 10 a.m. to 2 p.m. weekday shift. She is one of more than two dozen UMB employees who arrived through Project SEARCH, a continuing partnership among UMB, The Arc Baltimore, the Baltimore City Public School System, and the Division of Rehabilitation Services that aims to demonstrate the valuable contributions people with disabilities can make in the workplace.

Harry, who helps run the program at UMB with director Joanna Falcone, raves about its transformative nature.

“Since Mikeia began her journey from the Project SEARCH program to being gainfully employed we have seen her confidence rise, and she has become more independent,” Harry says. “Mikeia has learned to advocate and speak up for herself. Mikeia is hardworking, personable, very efficient, and eager to work and learn. She takes pride in being a working adult.”

Landrum points out Project SEARCH is a win-win, both for students and employers.

“I think that the Project SEARCH program is awesome!” she says. “It is a great resource for integrating your students into the workforce, helping them to realize their worth and becoming productive individuals. I highly recommend Project SEARCH to any employer seeking service excellence, lower cost, and increased productivity.”

And after some initial misgivings, Mikeia’s father now is an unabashed supporter of the program, too.

“She talks about her job all the time. I mean ALL THE TIME,” Jones says, chuckling. “I love that she’s happy. Would I support Project SEARCH if someone asked? Any given time. If they want me to come down there and talk to someone about it, I would be happy to do so. It’s a great program.”

As for Mikeia, she’s just happy that she and UMB found each other. Asked about her career goals, she says, “My hope for the future is to work for the Department of Neurology for a long time.”