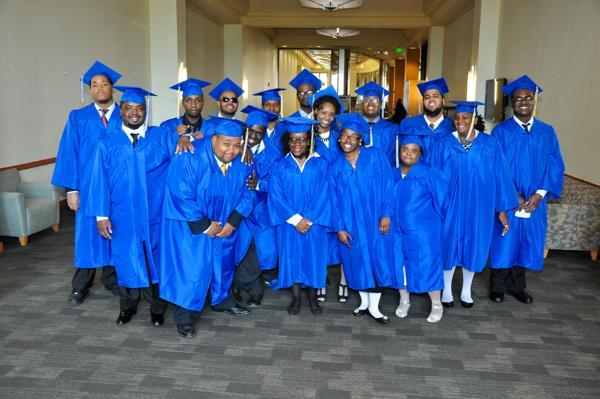 The 16 graduates filed into the Elm Ballroom at the SMC Campus Center on June 1, looking regally academic in their dark blue robes and caps as the traditional “Pomp and Circumstance” played on the sound system. There was one more thing all the graduates wore — ear-to-ear smiles. Because this was the commencement of the Project SEARCH Class of 2017 at the University of Maryland, Baltimore (UMB) and the University of Maryland Medical Center (UMMC).

And there was much to celebrate. For every graduate had overcome obstacles that eclipse those faced by your average high school senior. Those beaming in their caps and gowns all face intellectual and developmental disabilities. But like Project SEARCH said in its invitation to the ceremony “I will not let my disability affect my ability.”

“Just because the doctors placed a label over our children’s heads does not mean that they cannot do,” said Kadijah Bey Bryan, whose son Devonte was among the graduates. As the 80-plus family members in the audience nodded their agreement, Bryan continued “they have conquered and we see that today.”

She and Ottillie Geddis, mother of graduate Afrika Geddis, both admitted they had huge reservations when first approached about Project SEARCH, which offers Baltimore public high school seniors with intellectual and developmental disabilities the opportunity to explore careers and acquire real-life job skills by working at a business.

“Like most parents I was skeptical when we first signed up for Project SEARCH,” said Geddis, whose daughter only allowed her to speak during the ceremony after giving her a hug. “However after working with the staff and seeing the many different things they do with our children — the parenting and nurturing they continue to receive as they are being prepared for being independent and a job is miraculous. Thank you for all you have done!”

Steve Morgan, executive director of The Arc Baltimore, which partners with the Baltimore City Public School System and the Division of Rehabilitation Services to bring Project SEARCH to UMB, UMMC, and other institutions, also expressed his thanks for “the honor and pride” the graduates brought him in his final days before retirement.

A Word From the Grads

Then it was time to turn the ceremony over to the stars of the day — the graduates themselves. One by one, all got up in front of the crowd, introduced themselves, discussed the three 10-week rotations they worked at UMB and/or UMMC, and thanked those who helped them along the way.

Helping at the Subway restaurant at UMMC, veterinary resources, police station, parking and transportation, gift shop, carpentry. The list went on and on, with each graduate proudly discussing their rotation duties. Adding levity was the fact that each graduate had coined a nickname like “Food Queen,” “Mr. Talkative,” “The Princess,” and “Mr. Smiley,” aka Christopher Smith, who indeed did not stop laughing and smiling during his entire presentation.

Every so often the graduates said the magic words program manager Tameka Harry and the other Project SEARCH leaders long to hear: I found a job!

“Our goal is 100 percent employment for each individual,” Harry said after the festivities. “It might not happen right after graduation. But we will continue looking for jobs until we have everybody placed. And not any job but a job they want.”

The students’ thanks brought tears to some in the audience. “I would like to thank my grandmother for taking care of me. I love you,” said Tyanna Israel.

“Thanks to my mom, all the staff, my new friends, and Ms. Loretta aka Mom,” said Nikita Green. “I would like to thank my supervisor, Mr. Kenny for being a good role model,” said Maurice Wilkes. “Mrs. Danielle, thank you for the sweet treats you gave us,” said Brian Butler.

After the graduates received their Project SEARCH diplomas and posed for pictures, they formed a conga line and danced out of the room, united after spending their senior year of high school together.

“The program has come so far,” he said. “I just get such joy being here and seeing this. Vassie Hollamon [associate director, Operations and Maintenance] and Joanna Falcone [senior director, Arc Baltimore] were the ones who were so instrumental in getting everything off the ground nine years ago here. The University’s and the hospital’s support over the years for Project SEARCH has just been phenomenal.”

Elise Collier, whose Baltimore Transition Connection program worked with many of the graduates before they came to UMB/UMMC, was beaming. “Oh my goodness, yes I’m proud, you just don’t know!” she said. “I think I have seven more next year already accepted into the program.”

Tameka Harry stood outside the ballroom and happily surveyed the scene, graduates and families eating, drinking, and celebrating.

“I’m ecstatic,” she said. “I’m proud of them because I watch them when they come in until they leave. We are tough on them because we believe they can do virtually anything with the training of our job coaches. People come and say they want to be doctors, We don’t tell them they can’t be doctors but we’ll say how would you like to work in a hospital? For instance, the ones interning in the emergency room like doing what doctors and nurses do. It’s a proud day!”