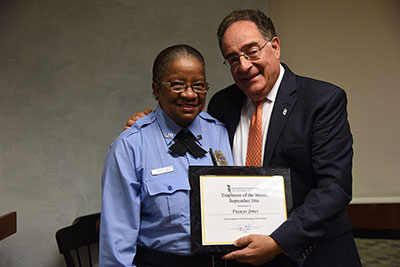 Whether it’s students, faculty, or staff at the School of Social Work (SSW), security officer Frances Jones, who patrols the front desk from 3:15 to 11:45 p.m., gives them the full benefit of her attention and vast experience.

For this and a whole lot more, Jones was named UMB’s September Employee of the Month.

As part of his presentation, UMB President Jay A. Perman, MD, read a letter from her nomination form.

“The social work student said, ‘Tonight after class I was feeling sick and not really fit to drive. I have epilepsy and I had experienced some warning signs that I might have a seizure. I decided to take my medicine and call my partner to come pick me up instead of attempting to get behind the wheel. Frances at the front desk was so incredibly kind to me. I told her what was going on and she let me stay in the building where she could keep an eye on me. She stayed at her post and still fulfilled all of her duties, but she also made sure that I was within her eyesight in case I needed any assistance. She was kind and caring and exactly what I needed. I truly appreciated it.’”

Of the letter, Perman said, “This really touched me, Officer Jones. I don’t know what else could be said to better describe you. The dean and others said you exemplify the core values of UMB, specifically those of civility, diversity, excellence, and knowledge. You’re a daily example of professionalism and courtesy. Congratulations on your award.”

Earlier Perman gave Jones a plaque and said an extra $250 would be in her next paycheck.

SSW Dean Richard P. Barth, PhD, MSW, gave testimony to how important Jones is to him and how she helps make sure that he conducts himself properly. “There are times when I get too busy and I don’t say good night and she’s like ‘Errrr,’” Barth said, growling to the delight of a group in the President’s Conference Room on Sept. 30. “And Frances reminds me I need to slow down a little bit and at least say ‘hi’ and ‘goodbye.’”

A member of the UMB Police Force for 31 years, Jones teared up when Barth spoke about her being “part of my family as well as the School family.”

Perman lightened the mood by adding, “Rick, I’m going to call her when I need help with you.”

After the ceremony, and the banter with Barth, friends and co-workers rushed to greet the guest of honor. Following a long hug, Julie Gilliam, instructional technology specialist at SSW, spoke of why Jones is so special. “She cares about people,” Gilliam said. “She and Rodney [Jamison, dayshift security] both are amazing. They make you feel safe. They know who comes in and out of the building. It makes for a safe work environment.”

And going above and beyond, like with the student showing signs of a seizure, that’s part of the job, too, Jones says. “To be there and just look the other way — no that’s not what your job is about,” she said. “Compassion, caring, all that is included, too. I’m like a mommy,” said Jones, a mother of four, grandmother of seven, and great-grandmom of four.

She says there are fringe benefits, too, of being at SSW for over 30 years. “You get to meet so many different people from so many different countries. I just love it,” Jones said. “Even though I’ve never traveled with anybody I feel as though I have because they’ll share the stories with me.”

And she was overwhelmed to be UMB Employee of the Month. “I’m at a loss for words,” she said. “I’m just really touched by this. I wish I could thank everybody. You wouldn’t have enough room in the story to name them all.”