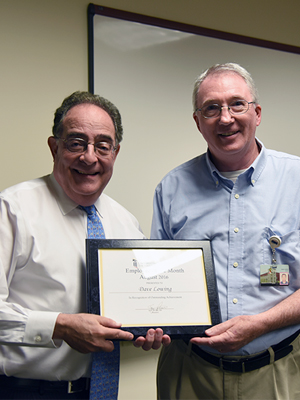 An industrious man whose work ethic dates back to 14-hour days as a youth on the QE2 sailing out of his beloved England, Dave Lowing usually takes professional challenges in stride. But he could feel his blood pressure going up in advance of a meeting in the president’s conference room on Aug. 17.

His supervisor in the School of Nursing’s (SON) Learning Technology Office, Matt Rietschel, would only say it was a “positive” meeting. And then President Jay A. Perman, MD, walked in the room and said: “You know what this is all about, Dave? You’re the UMB Employee of the Month!”

Lowing’s jaw dropped as Rietschel and a half-dozen others applauded. The personable Brit whose good humor and technical expertise have been keeping spirits light at the SON for 28 years was getting his due.

“Your longtime service is appreciated,” Perman said. “I also understand you have unselfishly handled all aspects of video editing for the faculty, students, and staff. You come in early in the morning and you don’t go home until the job is done. Total dedication.”

Lowing began working with the IT department at the SON in 1988, offering desktop computer support and audiovisual assistance for 22 years. Back surgery in 2010 necessitated a transfer to the team of Rietschel, assistant dean for information and learning technologies. This reignited a creative flame in Lowing, who in the 1980s had done TV production for a former employer at Towson University. “Being in the studio kind of brought everything back to me,” said Lowing.

In the past year Lowing did about 700 recordings, spanning lecture captures, webcasts, voiceovers, and teleprompter work. Of the videos, about 80 percent are academic, 10 percent are special events, and 10 percent are for grants/contracts.

Asked his favorite type of project, Lowing spoke of just doing four lecture videos. “Sadistic as it might be, I enjoy doing multiple lectures at the same time. It’s a challenge to get everything lined up and executed in a specific order.” And the turnaround time? “Oh, within hours of the event,” he says, fitting for a high-volume area that Rietschel said had almost 16,000 hours of viewed content last year.

A new tool in Lowing’s video toolbox is Green Screen, the technology weathercasters use to superimpose images on a blank screen. It’s allowed him to replace bland backgrounds like books in a bookcase with specific location shots while retaining the sound serenity of the studio.

“I just did one for Shannon Idzik [associate dean] and Michelle Gonzalez, a nurse anesthetist. As a backdrop we put an OR, operating table, anesthesia machine, and just dropped that in post-production.”

Taking something complicated and making it seem easy is one of Lowing’s strengths, says Joanne Pinna, MS, senior instructional technologist who co-crafted the nomination with Rietschel.

Lowing said it’s a piece of cake (or “Bob’s your Uncle,” one of his pet British phrases) after working for months at a time over six years on the ocean liner Queen Elizabeth 2.

“My first job was as a bellboy,” Lowing recalled with a smile. “I had just turned 17. Just dumb luck that I got on the QE2. I could have gotten on a tanker or a freighter.”

When he moved up to waiter there was another stroke of good fortune. He met his wife, Nancy. “She was on a cruise with eight of her cousins,” Lowing said. “I was their waiter.” Now married for 37 years, their courtship was, in a word, complicated.

“The last year and a half after I met my wife, I used to go back to England, get off the ship, ride home on a motorbike to see my parents, and then go to a travel agent, get a ticket, fly back to the States to meet with her. Then I’d fly back and catch the ship. I was a lot younger then!”

So what’s a bigger deal, being named UMB Employee of the Month for August or traveling on the QE2?

“Oh, UMB Employee of the Month is far better,” he said with a chuckle before turning serious. “It’s the culmination of these last 28 years. When I started at the school I never imagined how far this would go. I had been laid off at my last job after eight years, but everyone here has been wonderfully supportive, I’ve been blessed to have a great crew and have Matt as a boss. He’s been fantastic. I know if I have an issue or a problem and I don’t know what to do, I know I can go talk to Matt.”

Then the smile returned and Lowing added, “Matt will push me out the door first, but then he’ll tell me to come back.”