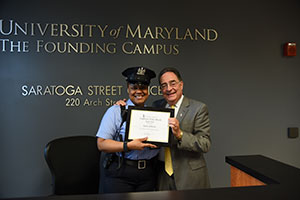 If you look in the dictionary under the word “stunned” you might just see security guard Keare Johnson’s picture from June 15. That’s when UMB President Jay A. Perman, MD, entered the Saratoga Building lobby, as he does numerous times a day. Only this time, joined by a crowd of people, he stopped and pointed to the personable Johnson, saying “so this is about you. You are UMB’s Employee of the Month.”

Johnson’s jaw dropped and a look of disbelief crossed her face as she let loose a shriek that likely was audible on the roof of the parking garage. The applause that followed from the 15 or 20 people representing the UMB Police Force, Human Resources, the Office of the President, and more made it clear that Perman isn’t Johnson’s only fan.

“I and all the people who work in this building are greeted with sunshine when we see you,” Perman said to Johnson, who was assigned to Saratoga a year ago after two years as a floater. “It’s a sunny day no matter what the weather is outside once you walk into this lobby. You are a real professional. You take care of us, you watch over us, and at the same time you present the best public relations because you are the first person people see and the impression has to be right. You do that in a way that is an example for the rest of the institution.”

Security supervisor Clarence Fields cited her “friendly demeanor” in nominating Johnson for the award. In addition to keeping the Saratoga Building secure and demonstrating the core value of excellence, Fields said, “Ms. Johnson never fails to greet me individually no matter how many people are in the lobby. She always has a warm smile and a greeting to start my day off on the right foot. Ms. Johnson contributes to increased morale on campus with her encouraging smile and heartfelt love for her job.”

Indeed, Johnson appears to know everyone on a first name basis, wishing them well as they come and go. She sees such friendliness as part of her job. “Yes, I think security is part of customer service so I think you need to have a good rapport with the people you are working with, the people who you are protecting.”

Many important visitors pass through the Saratoga Building, which houses the Office of the President. But Johnson said they get no preferential treatment. “No, we just basically treat everybody the same,” Johnson said. “We maintain our professionalism and offer service with a smile.”

In addition to Johnson receiving a plaque, Perman told her there would be another $250 in her next check, eliciting another shriek from the appreciative Johnson.

“I’m surprised and happy,” said Johnson, still beaming 15 minutes after the award ceremony. “It’s good to know they appreciate what I do. I just want to thank all my co-workers, every one of them, and the people who nominated me.”

Antonio Williams, MS, associate vice president for public safety and chief of the UMB Police Force, said it was a proud moment for his team, especially the 80 security officers and supervisors at UMB.

“I’m grateful to Security Officer Keare Johnson for the great service she provides UMB,” Williams said. “She is professional, conscientious, and kind. She sets an example for others to follow. I am proud of her recognition as Employee of the Month.”