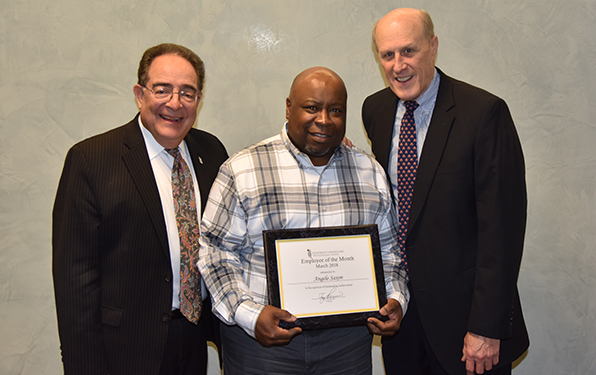 If Angelo Saxon, senior accountant for the UMB Foundation, were defined by a symbol, it would be a smiley-face emoji. During his 10 years in UMB’s Office of Philanthropy, Saxon has come to be known for two things: quality accounting work and his upbeat attitude.

UMB President Jay A. Perman, MD, said as much on March 22 when he surprised Saxon by naming him Employee of the Month.

“Colleagues say you are a consummate professional,” Perman said before giving Saxon a plaque and telling him there would be $250 in his next paycheck. “You represent the foundation in a cheerful way with a can-do attitude. Your answers to requests are speedy. You’re not just a colleague; you’re a teammate.”

Minutes earlier, Saxon was more than a little confused. He had come from the Lexington Building to the Saratoga Building with a group of co-workers, including Thomas J. Sullivan, CFRE, MS, chief philanthropy officer and vice president, ostensibly for a tour of their new offices. But rather than going to the 13th floor, where the foundation staff will be relocated later this year, they went to 14. And when Perman showed up to lead the “tour,” Saxon knew something was up.

“I really avoided you all day long, Angelo,” Pamela Heckler, COO and treasurer of the foundation, told Saxon after the ceremony. “Because I had this big smile on my face and I didn’t want you to know.”

“Of course the downside is he’s never going to be able to trust you again,” Sullivan said, teasing Heckler.

Such give-and-take among colleagues is one of many things Saxon enjoys about working in the Office of Philanthropy. “We all gel very well over there,” he said.

Then there is the work itself. “I’ve always been a numbers guy so the accounting fell right into place,” said Saxon, who has mastered their system, Financial Edge NXT (Next Generation).

The UMB Foundation is an independent entity that manages and invests private gifts and/or property for the benefit of UMB, facilitates fundraising programs and contributions from private sources, and engages in other activities to further the educational, research, and service missions of UMB. Its current holdings are nearly $300 million.

Saxon knows all the ins and outs of handling foundation money. “I know the foundation as a whole — from the opening of an account, what it takes to disperse funds from the account, how to reconcile the account. How the financial system works start to finish.”

Because of this knowledge, not to mention his sunny outlook and willingness to make Financial Edge NXT house calls, Saxon is in demand among schools and departments.

“Angelo always provides assistance with a great attitude,” said Jennifer Fisher, executive director of development operations at the School of Medicine. “Every request comes with a proactive ‘please and thank you’ and his answers to requests are speedy. It’s always a pleasure to work with Angelo.”

Fisher’s colleague, assistant director Trish Bates, agrees.“Angelo is always extremely helpful,” Bates said. “His work is fast and accurate. He goes above and beyond when asked to perform a task and he always maintains a positive attitude even in difficult situations.”

“That’s just me, that’s my total personality inside and outside of work,” he said. His four brothers and one sister also are upbeat. “Every last one of us,” he said with a wide smile. “Mom and Dad absolutely raised six children with the same spirit that I carry.”

The Office of Philanthropy considers itself fortunate Saxon is that way.

“Angelo represents the foundation and our department with a cheerful, can-do attitude!” Heckler said in her nomination. “We rely on his institutional knowledge as one of the core ‘point people’ in our department. Throughout many transitions and staff changes he is a constant — a dependable member of our team. And his uplifting positive demeanor is most appreciated!”

“Angelo has done a phenomenal job adapting to various departmental changes and accomplished many responsibilities. He is very helpful, dependable, and conscientious. We are so fortunate to have him in our department as an excellent team player.”

Saxon is just glad to be part of the UMB team.

“I have been here long enough to adjust to different management styles and have learned from each,” he said. “I do enjoy the motivation of our current management to build upon a culture of philanthropy. I believe in Dr. Perman’s mission to encourage and be a part of the outcome of the community in which we work for the betterment of all.”

And as for those colleagues who got him to the Saratoga Building on March 22 under false pretenses? “Oh, they’ll pay,” Saxon said with his familiar smile. “They will have to eat every last doughnut I bring in here!”