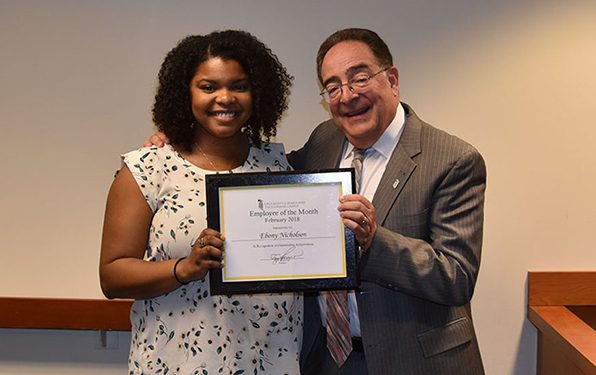 When Ebony Nicholson, MSW ’16, was summoned to the Saratoga Building’s Peacock Room for a meeting on March 19, she came prepared to talk to University of Maryland, Baltimore (UMB) finance and human resources leaders about expanding programs in the Office of Interprofessional Student Learning and Service Initiatives (ISLSI).

Nicholson, the ISLSI’s academic coordinator for diversity and inclusion initiatives, was waiting for Dawn Rhodes, MBA, chief business and finance officer and vice president of UMB, to show up, but when University President Jay A. Perman, MD, walked into the room and started asking her questions about who was running the meeting, Nicholson thought something wasn’t quite right — and started to feel a bit unsettled.

But Perman put her at ease with some playful banter, and Nicholson’s fears turned to tears when he informed her she had been selected as UMB’s Employee of the Month of February. The group that had gathered for the “meeting” cheered the news, and once the applause died down, one of her ISLSI colleagues asked, “Were you getting nervous?”

“Yeah. I thought I was getting fired!” Nicholson said, sparking laughter as co-workers offered her hugs and a bouquet of flowers in celebration. But that wasn’t all she received. Perman delivered a plaque, a note of commendation, and news that an extra $250 would be in her next paycheck, all rewards for Nicholson’s sterling efforts to promote diversity and cultural enrichment at UMB.

Perman singled out one of the ISLSI’s programs, the Poverty Simulation, an interactive, three-hour workshop designed to help participants understand what it might be like to live in a typical low-income family and survive from week to week.

“People are very proud of you, starting with me,” Perman told Nicholson. “It’s far from your only initiative, but I know a lot about the Poverty Simulation, and everyone’s talking about it. It always inspires me when we hire people who in short order make UMB a better place. And that’s what you’ve done in taking on these types of initiatives.

“I also know you’re a graduate of our School of Social Work,” Perman added. “Our graduates turn out pretty well, and certainly you’re evidence of that.”

Nicholson, who’s from Silver Spring, Md., earned a bachelor’s degree in law and society from American University in Washington, D.C., spent two years in Zambia with the Peace Corps, then worked for the Children's National Medical Center in D.C. As she began pursuing her MSW degree at the School of Social Work (SSW) in 2014, she also worked for ISLSI as a Diversity Fellow. After graduation, she joined the office on a contractual basis before being hired full time in December 2016.

“Ebony was hired to invigorate the diversity and inclusion programming of the department,” Jones Carney said. “Not only did she reimagine existing programs, she also created and piloted a cultural responsiveness training program for staff representing various areas of the University called the Safety Pin Initiative. The eight-session program is focused on equipping participants with the tools necessary to continue gaining cultural competence and building allyship. Not only did Ebony research and create the curriculum, but she also facilitates many of the sessions.”

One of Nicholson’s main goals is for those at UMB and in the Baltimore community to broaden their ideas about and understanding of different people, especially traditionally marginalized and under-represented populations. Regarding the Safety Pin Initiative, she says, “It teaches staff and faculty about how to be an ally for various groups of people and talks about how to incorporate being an ally into your professional life. It also asks how we can re-examine our policies, procedures, and teaching materials to make sure they are more inclusive and create an affirming campus climate for everyone.”

Nicholson is particularly proud of the University’s response to the Poverty Simulation, saying there have been nine sessions during the 2017-18 academic year and most have been filled to the 88-person capacity. She says it gives students who will become health and human services practitioners a better understanding of what people with limited resources must deal with.

“A lot of the students have ‘aha moments’ around empathy and can begin to understand where the people they’ll serve are coming from,” Nicholson says. “Participating in the Poverty Simulation allows them to understand that people who are living at or below the poverty line have to prioritize. So maybe going to the doctor two times a week is not realistic when you only have so much money to get to work and to pick up your kids and things like that.”

She thanked Jones Carney for pushing her to propose new and innovative ideas and teaching her to not be afraid of failure — “Courtney tells me, ‘You have to try it. If you never try it, you’ll never know.’” Nicholson also praised several SSW mentors for allowing her to bounce ideas off them and help her to “organize my thoughts.”

Nicholson said she was shocked to be chosen Employee of the Month, considering “there are so many people doing such great work here.”

“The ISLSI team works really, really hard. Campus Life Services as a whole, serving all the students, does a lot of really great work,” Nicholson says. “With all the people who make this place run, I am very, very surprised to win this award, but also very honored.”