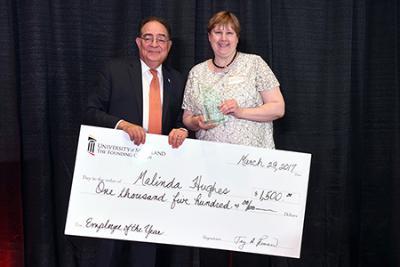 Malinda Hughes was named UMB’s Cecil S. Kelly Memorial Employee of the Year and before the ink had dried on the oversized check in her hands she was showing why she is such a special individual.

Hughes, recently promoted to chief of staff in the Office of Academic Affairs and the Graduate School, donated her $1,500 award to the UMB CURE Scholars Program, the University pipeline program that prepares West Baltimore middle schoolers for health and research careers.

“That’s Malinda,” UMB President Jay A. Perman, MD, told those at the Employee Recognition Luncheon after announcing what Hughes told him about the donation onstage.

As UMB’s May Employee of the Month, Hughes was automatically entered into the running for the annual award. She was recognized in May for her indispensable role in UMB’s 2 ½-year Middle States reaccreditation process.

Matt Lasecki, SPHR, chief human resources officer and host of the March 29 luncheon at the SMC Campus Center, read part of Hughes’ nomination entry. “Malinda almost single-handedly organized and executed the four-day Middle States site visit. She worked 16-plus-hour days, making sure every need of our visitors was cared for. She arranged for the meeting rooms, meals, escorts, badges, travel, copies, hotel rooms, pre-event briefings, etc. She even stayed at the hotel with them to be at their beck and call. There is no way UMB could have done this without her.”

Afterward, an emotional Hughes said she was honored just to be part of the group of dedicated, talented employees up for the award. “I ranked myself 12th of the 12. I’m just stunned,” she said, wiping a tear. “I didn’t see this coming.”

Asked about being the first UMB winner to donate her $1,500 prize, she said it was only fitting. “I am a UMB CURE Scholar mentor to two seventh-graders at Green Street Academy. And my office is two doors down from Robin Saunders, the UMB CURE executive director. I see how hard they work and I see the fruits of their labor by being a mentor. Donating the award money to this program will be the very best use for it.”

The luncheon started with Lasecki, with trivia from the milestone years, and Perman recognizing the 20-, 25-, 30- and 35-year employees who were honored. “Together, the long-serving employees we honor today have dedicated 1,685 years to this University,” Perman said. “And me? All told, I’ve given a dozen years to UMB. So it’s clear that UMB’s reputation — our good name and our good works — they say a lot more about all of you than they do about me.”

“Persistence,” said Reynolds when asked what the 35 years meant to him. He started out in the School of Medicine as a clinical administrator in radiation oncology, went to the School of Dentistry for 17 years and then was briefly with the School of Public Health before moving to Academic Affairs in 2009, where he is assistant vice president of fiscal and administrative affairs.  “But my fondest memories are of the School of Dentistry,” he said. “I really liked working for Dean [Richard] Ranney.”

Fellow 35-year honoree Griffith said it was hard to believe. “It feels just like yesterday. I did my first six years in the Finance Office and then in the Grants and Contracts Office, where I’ve been ever since,” said Griffith, who added she is “pretty proud of myself” to move up from an account clerk I to a senior administrator during her tenure.

Hughes wasn’t the only award winner recognized. Aphrodite Bodycomb (Academic Affairs), Rebecca Bowman-Rivas (Carey School of Law), and Sanjay Uchil (School of Medicine) were announced as nominees for Board of Regents Awards.

Then Christina Manoto, coordinator in Campus Life Services, received the $2,000 James T. Hill Scholarship, which was established to support the University’s commitment to staff development in recognition of the longtime vice president.

Manoto, a part-time student at UMBC the past six years, said the scholarship “will be perfect to help with my fees.” Striving to be the first college graduate in her family, she is excited to be closing in on her goal. “Everybody I work with is either in a master’s program or is going for a doctorate and here I am struggling to pass calculus,” she said with a smile. “Everyone here is so supportive. Even when I don’t think I can make it they tell me I can. I’m very thankful for all their support.”

UMB’s Community Service Award went to the Staff Senate for organizing many Universitywide outreach projects such as the Back to School Supply Drive and Holiday Gift Toy Drive to help local charities and needy neighborhood schools. Staff Senate President Colette Beaulieu, office manager in the Health Sciences and Human Services Library, deflected the praise after accepting the award. “I have to give credit to Lois Warner [coordinator, Foundation Relations] who is chair of our Outreach Committee. Without her none of these projects would get off the ground.”