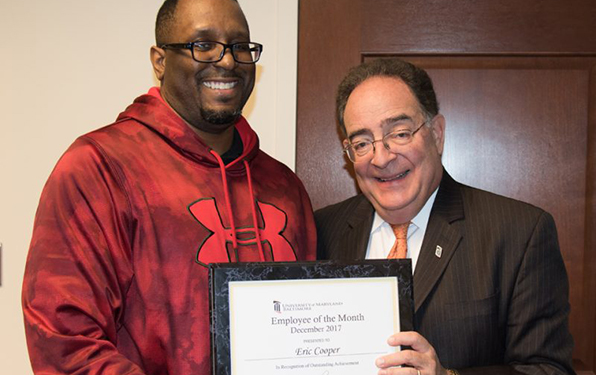 Eric Cooper, an accounting clerk III in the Office of Operations and Maintenance, thought he was attending a team-building meeting recently when UMB President Jay A. Perman, MD, walked in the room to present him the Employee of the Month award for December.

“This is not about team-building, this is about you,” Perman said. “You know what it says here about you? It says you are the type of employee whom every supervisor dreams of — hard-working, attentive, friendly, ambitious, kind, a valuable teammate. … Accountability is one of our core values and you are showing it.”

Cooper said he was surprised when Perman walked in the room after the Dec. 12 ceremony. “I’ve seen Dr. Perman in The Elm and on the website, but to actually meet him and have a conversation with him, that’s cool.”

Cooper was nominated for the award by his supervisors, Scott Versteegh, manager of Supply Services, and Nicole Miskimon, associate director of Facilities Management.

Cooper began working for the University in 2013 but left in 2015 to pursue another opportunity. Just days into his new position, he regretted the decision to leave UMB. When his contract ended sooner than expected and he emailed Miskimon asking to use her as a reference, she immediately texted him and asked him to call — there was an opening. He came back in a different position but soon moved back to his old desk after someone else left, he explained.

“When I got back here, I told [Miskimon], ‘I’m not going away,’ ” he said. He enjoys his job and said he feels like he has even more to offer.

As an accounting clerk, Cooper is responsible for purchasing needed maintenance supplies and following through with those orders. According to the nomination, Cooper consistently goes the extra mile to meet his goals and goes above and beyond what is expected of him. He offers to help technicians carry their materials across campus and helps his co-workers in the office when they get behind. He even picks up trash off the street before and after work and helps direct lost students, patients, and confused truck drivers.

“Eric has the ability to talk with everyone and make them laugh — his demeanor keeps the workplace pleasant even when the days can be monotonous at times,” his supervisors wrote in their recommendation.

Cooper says he gets his people skills from his side job — on the weekends, he’s a barber at Mel’s Clip Joint in Essex. He’s been a licensed barber for six years and has been cutting hair since he was 16. At one point, he was a full-time barber but needed steadier work and better health insurance, he said. He’s working on getting his master barber license and hopes to own his own shop one day.

In the meantime, he’s glad to be at UMB.

“Getting that second chance really made a big difference in the way I come to work,” he said. “I set my goals pretty high coming back. … I want to learn as much as I can.”

Getting this award made his month, Cooper said. His mother died last year and it’s hard around the holidays, he admitted. But the award, and the $250 that comes with it, helped.

“My mom was my hardest critic. I did everything I could under the sun to make her proud,” he said. “She’s looking down now with a smile on her face, probably tearing up. This made me feel good.”