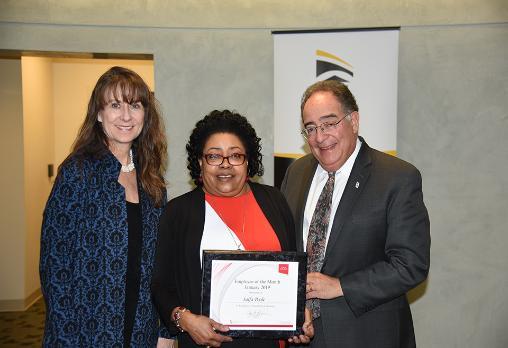 Did you ever invite friends to your own surprise party without knowing it? This was the case for Saifa Poole, assistant to the senior vice president, who sent the email asking Office of the President staff to gather for an “important meeting” on Jan. 17.

Instead of University of Maryland, Baltimore (UMB) President Jay A. Perman, MD, updating the staff about new groups moving into the Saratoga Building, as the email invitation implied, he turned to Poole with a smile and said, “This is all about you. You are the UMB Employee of the Month for January.”

The 15 or so colleagues burst into applause before Perman detailed why Poole was being honored. Saying “I couldn’t say this better myself,” he read from the nomination turned into Human Resources by Jennifer Litchman, MA, senior vice president for external relations and special assistant to the president, to whom Poole has reported for the past 15 years.

Perman listed how Poole not only organizes the office, keeps everyone apprised of trainings, events, and initiatives of importance, processes paperwork but also tackles bigger projects, such as inspiring creation of UMB Professional Administratives Committed to Excellence (UMBPACE)  and assisting co-workers inside and outside of the department — “always with a smile and a can-do attitude,” Perman said.

“I was doubly blessed when I was able to get Jennifer to come over here from the School of Medicine [in 2012] because you came, too,” Perman told Poole.

After accepting congratulations and posing for pictures, Poole answered some questions for this story. But not for long. She was due at Port Discovery to meet a busload of children in UMB’s A Kid’s Port to Discovery: Healthy Habits program, where UMB faculty and staff teach young people from West Baltimore about things like oral health, anatomy, and bullying and peer pressure coping mechanisms over five weeks, concluding with a certificate ceremony.

The next day Poole still “was a little shaky” about her newfound status as an Employee of the Month. “You all really pulled one over on me. I had no idea,” she said with a smile. “I don’t usually like surprises, but that was nice.”

Asked about her work ethic, which often keeps her at the office well past her assigned time, Poole credited her father and added, “That is who I am. I’m a person who likes to serve and help people. I do it in my family life, my personal life as well as work.”

At home, Poole cares for a sister who is intellectually disabled. “I’m from a BIG family. I’m one of 13 kids,” she said. “The tagline at our family reunions is ‘Cousins by the Dozens.’ My parents died when I was 13, so my older sister cared for my sister when she was in special ed schools. She’s been living with me for the past seven years because my older sister is having medical issues.”

So when a colleague at the University was having trouble hearing because he couldn’t afford to have his hearing aids fixed, Poole knew what to do.

“Some people have trouble understanding him but I can because of my sister. Our office always donates to a cause at Christmas, so when I told them about his situation, that his hearing aids were in the shop being repaired but it was going to take him a month or more to come up with the $100 or $150 to get them out, we had a great response and now he can hear again,” Poole said. “No matter what you ask him to do he does it with such pride and diligence that I took him under my wing.”

And when administrative assistants from all over the University kept calling her and asking the same questions, she knew what to do, too, forming UMBPACE. Now information about policies and procedures, tips on how to expedite purchasing orders and such are shared through meetings and a new website.

“Clara [Woodly, executive assistant to the president] and I hold high-level administrative positions at UMB,” Poole said of her colleague. “We were getting a lot of requests for the same information, and I thought maybe we could get a group of seasoned University administrators like most of the VP’s assistants, people who know UMB, who have been here a while and can guide and help others. I ran it by Jennifer and she said, ‘That’s a great idea and you can roll it out through UMBrella.’ ”

“The reason I’m here at UMB is because of her. The reason I’ve stayed here is because of her,” Poole said of Litchman. ”She has mentored me, allowed me to grow, instilled confidence in me,  and I just appreciate the freedom of creativity and her support for the endeavors that I pursue.”

Litchman raved about Poole’s growth as the Office of the President's “go-to person” and her “generosity of spirit” — and ended her nomination by saying, “As far as I'm concerned, Saifa is employee of the day, week, month and year — every year.”

To say that Poole is giving of her time is an understatement. She’s also giving of her money, donating the $250 she received for being Employee of the Month to UMB’s Catalyst Campaign. “It’s not like it’s money I planned on having,” she said.

She will hold on to the award plaque, however, and was clearly touched by the recognition. “I was very humbled as well as honored. Again, this is my work family, they make it easy for me to come to work each day, and it is always great to know that people appreciate you.”

She was quick to share the good news with her home family as well. “When I went home last night I told my son, ‘Guess who you’re looking at? You’re looking at the UMB Employee of the Month!’ ”