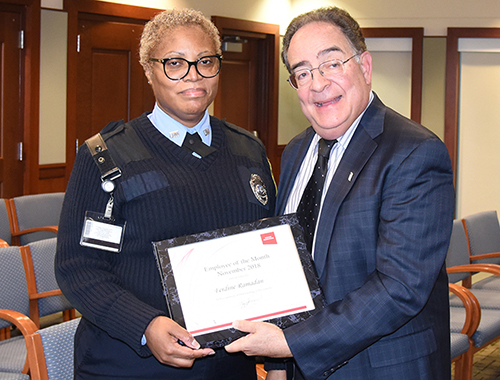 That’s the mindset Ferdine Ramadan carries with her every day in her job as a University of Maryland, Baltimore (UMB) security officer stationed inside Health Sciences Research Facility I. And it’s what prompted her quick thinking and actions recently when two men took an apparent disagreement from the sidewalk into the building.

One man entered the facility first, being pursued by a second man, but Ramadan’s rapid response defused the situation. She stopped the first man from moving farther inside the building while calling for backup on her radio, then persuaded the other man to back down before sending both outside the facility while UMB Police arrived on the scene.

For her actions, Ramadan received the UMB Employee of the Month Award for November, earning praise from University President Jay A. Perman, MD, and congratulations from UMB Police Chief Alice Cary, MS, and other public safety colleagues during a ceremony Nov. 26 in the President’s Boardroom at the Saratoga Building.

The ceremony was supposed to be a surprise, but Ramadan had figured it out. Someone told her she’d been nominated for the UMB award, and her colleagues had been offering congratulations, without saying why. “I’d say to them, ‘What are you congratulating me for?’ And they would walk away without replying,” she said. “I kind of knew something was going on.”

Perman took note of that in his remarks. “This was going to be a surprise, but that doesn’t take away from the fact that we want to honor you … so act surprised or something!” he joked before handing Ramadan a plaque, a letter of commendation, and news that an extra $250 would be in her next paycheck.

Turning serious, Perman told Ramadan, “You are the Employee of the Month because the people who you help and the people who you protect have chosen to honor you. And it’s a real privilege for me to thank you. Clearly you provide an example for everybody at UMB because you are so devoted to this institution. It’s very much appreciated.”

Ramadan’s effective response was appreciated, too, by Anita Warren, a research data entry operator at the School of Medicine who observed the security officer’s actions that day and promptly put forth her Employee of the Month nomination on the Human Resources website.

“I was able to witness firsthand the professionalism, effectiveness, and safety-first attitude of Ferdine Ramadan,” Warren said. “These men were attempting to enter the facility without due cause or reason, other than to harm each other and maybe innocent bystanders. Ms. Ramadan politely but forcibly got these men to leave the building, then she was able to alert her fellow officers to the situation.

“With her willingness to ensure the safety of the staff and visitors first, she was able to provide vital information to responding officers. I believe if it was not for her quick action, this situation could have escalated.”

Asked about being singled out for such praise, Ramadan says that she doesn’t like to draw attention to herself and that she was simply doing her job. And she called it a teachable moment.

“When I got home, I replayed the whole incident in my head, sort of thinking, ‘What could I have done differently? Maybe next time I should communicate to my superior officers better via my radio.’ But the more I think about it, I was just doing my job the best I could.

“The main thing is that nobody got hurt, and I’m happy for that.”