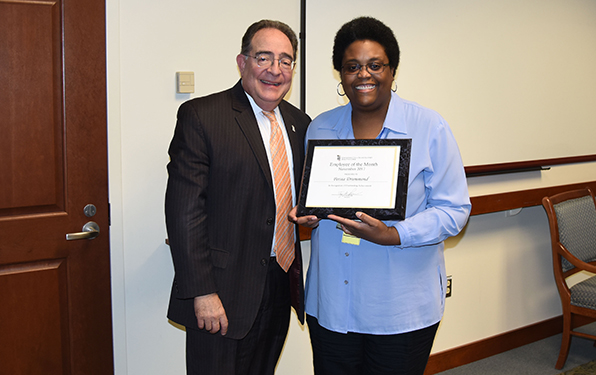 Persia Drummond says she’s the joker of the group among her co-workers at the Health Sciences and Human Services Library (HS/HSL), where she is the weekend supervisor. That was evident when she was honored as UMB’s November Employee of the Month on Nov. 20.

After surprising Drummond with the award, UMB President Jay A. Perman, MD, shared a series of glowing comments about her work at the library, thanked her for her efforts, and said he had some things to give her.

The laughs continued after Perman told her there would be an extra $250 in her next paycheck. Drummond smiled, rubbed her hands together, and said, “Ooooh, I can buy more books! Thank you!”

“I am probably the ‘jokiest’ person at the library,” Drummond said later, “and I just like to make everything fun. I just have energy and bubbliness. I even make cleaning day fun, like, ‘Let’s have snacks and pizza, and let’s clean while we do it!’ ”

When it comes to getting her job done, though, Drummond is super serious, showing impressive work ethic, versatility, and dedication to the HS/HSL.

“She is professional, dedicated, a natural leader, and proud of her work, regularly receiving compliments from colleagues and patrons,” said Brown, her supervisor. “As our weekend supervisor, she is responsible for not only the service desk but also control of the building when there are often many students and visitors around but few other employees.”

Perman echoed Brown’s compliments, telling Drummond, “People say that when they encounter you in the library, you’re always so helpful. Dr. Philip Mackowiak, a professor emeritus at the School of Medicine whom I hold in very high regard, said in an email, ‘Just a short note of praise for Persia Drummond. I needed help in the library today and she went out of her way to see I got what I needed.’

“There are a lot of accolades for you, and you’re the kind of person we need a couple thousand of at UMB,” Perman said. “So I want to thank you. Keep up the good work.”

Drummond, who has worked at the library for 12 years, pulls 12-hour shifts on Saturday and Sunday, providing reference and circulation services among other tasks. “Anything I can do that’s within the scope of the library, I will do,” Drummond said. “And if any emergency arises, I’m in charge of the building.”

In addition, she’s as dependable and durable as can be, according to her supervisor. “She is exceptionally reliable and hasn't called out sick or used annual leave on a weekend for years,” Brown said. “This is remarkable and shows a profound dedication to the library and respect for her colleagues.”

Drummond says she’s simply being conscientious, not wanting to disrupt a co-worker’s weekend plans by asking someone to fill in for her.

“By the time you get to the weekend, most of the people have already worked their 40 hours, so I just don’t get sick,” she said. “People are going to be doing their weekend events, so I make it my business to be there. I plan my activities during the weekdays.”

But library services are closest to her heart.

“I just love libraries, and I love helping people. That’s what it comes down to,” Drummond said, turning serious. “I work with a great group of people, and it’s an overall good campus. You run into interesting people, unique personalities.”

One of those unique personalities is Drummond, the humorous sort who also showed off her humility by saying her Employee of the Month honor was a group effort.

“It’s an honor, and I wish everyone at the library could win,” she said. “We’re a great bunch. It’s easier to do my job because it’s a great place to work.