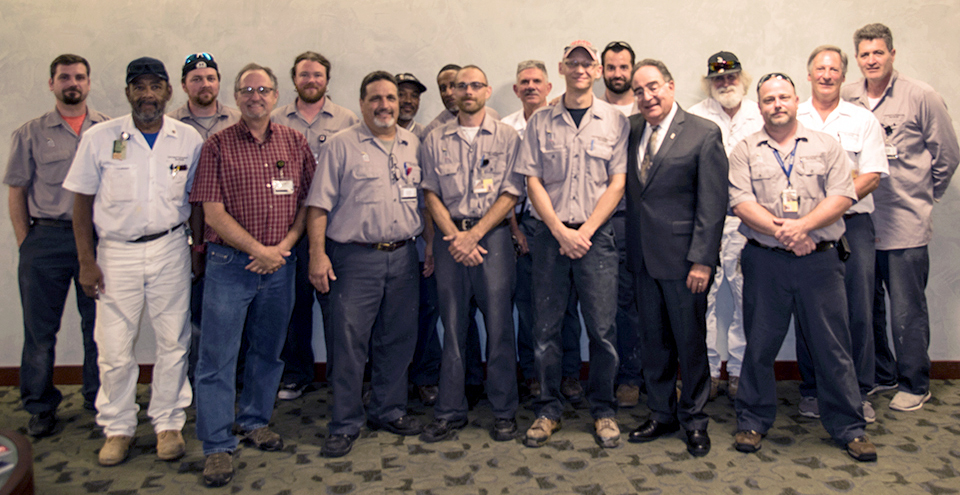 Vincent Cancelli might seem like an unassuming and humble guy, diligently doing his job as a multi-trades chief in the University of Maryland, Baltimore’s (UMB) Office of Facilities Maintenance. But give him a work order, and he just might turn into … MacGyver?

Recently tasked with finding the source of a water leak in the Francis King Carey School of Law, Cancelli used his intelligence and improvisational skills to determine the cause, referencing the famed troubleshooting TV character as he described the mission. After busting three holes into a 6-inch cinderblock wall, Cancelli saw that there was moisture around a pipe but thought the cause of the leak was probably 10 to 15 feet higher through the chase that’s used to conceal piping.

“So I made what I’d call a 15-foot selfie stick,” Cancelli says with pride. “In the shop, I ripped a piece of wood down and took a piece of flexion and crimped it to fit my phone on one end. Then I put duct tape on it, because I didn’t want to lose my phone inside this cavity. I turned on the video on my phone, laid down on my back, and fished this stick up there and videotaped around the pipe. I brought it down, reviewed the video, and — boom! — there it was, a big crack causing the leak.

“My co-workers got a kick out of that, but I’m good at what I call MacGyver-type solutions: Putting something together to figure it out and get through the problem.”

It’s this type of creative thinking and job performance that earned Cancelli recognition as UMB’s Employee of the Month of September. University President Jay A. Perman, MD, surprised Cancelli with the award Sept. 7 in the President’s Boardroom at the Saratoga Building, where 15 of his co-workers gathered to join in the surprise and congratulate him on the honor.

After some good-natured banter with the maintenance crew, Perman informed Cancelli of his spoils as the award winner: a plaque, a letter of commendation, and an extra $250 in his next paycheck. Then Perman turned serious, telling the honoree how much he was respected and admired among his peers and supervisors.

“Your colleagues say that you embrace the University’s core values,” Perman said. “You’re accountable for your work, and you want to make sure it’s done right. You’re civil, collaborative, and ensure that things are done in an excellent fashion. And I’m here to tell you that you’re very much appreciated by your co-workers and by me.”

Michele Ondra, MS, MBA, associate director of administration and finance for the Thurgood Marshall Law Library at the Carey School of Law, seconded that notion, pointing out Cancelli’s stellar work in helping get the school’s facilities prepared for an accreditation visit last February.

“Vincent not only completed our long list of work orders on time, but he also was proactive in providing recommendations on how we could improve our facility,” Ondra said. “If we put in a work order that will be assigned to him, we know that it will be completed in a timely manner and with the utmost care. We have complete confidence that he will get it done and will communicate all of the important details back to us.”

Let There Be New Lights

Cancelli talked about one such Carey School of Law task in which his and his co-workers’ proactive and collaborative approach paid dividends.

“In the law school library, there were lights that had been out for a while, and they were very hard to reach,” he says. “So instead of just replacing them, we did an LED project, converting that entire area into LED lights, which will last for 15 or more years. The electrical shop and the multi-trades shop were involved in that, and that’s what I like to do, bring all the trade groups together.”

Cancelli says he’s always been handy and took carpentry and machinist courses during and after high school as well as courses on computer integrative manufacturing, which led him to a job with the old Lever Brothers manufacturing plant in Baltimore. He also worked for the Baltimore County Public Schools System doing roofing and repairs before joining UMB in the fall of 2017.

Asked to describe his job in a nutshell, Cancelli says, “If anything needs to be fixed, whether it’s something minor to major, we do it in a multi-trades shop. It could be a minor thing like fixing a leg on a chair that’s broken or needs adjusting. Or it could be a major water leak like what happened at the School of Law. We identify the problem, and we mitigate the issue.”

Cancelli says the multi-trades shop personnel is divided into four zones of responsibility around the UMB campus, and his area, Zone 3, includes buildings old and new such as the schools of law, dentistry, and social work; the Pine Street Police Station and Pine Street Annex; the Lexington and Saratoga buildings, and more.

“It’s a very big zone,” he says. “We stay within the footprint of our zone, but if manpower assistance is needed in other zones, we’ll venture out and go help them out. Because at the end of the day, we’re still one big unit.”

‘Do Your Thing and Get It Fixed’

Mark Ewing, assistant director, structural trades, says when he interviewed Cancelli for the job, he could see quickly that he was a lifelong learner, and his instincts have proved correct.

“He is not comfortable with status quo and will not settle for less than the best,” Ewing says. “The decision to hire him has been affirmed by his work ethic and the values he carries. Every day Vinnie brings great benefit to our customers and this University.”

Cancelli says he felt a bit awkward to be singled out as Employee of the Month because he’s not used to being in the spotlight, but he added that it was much appreciated. He says he’ll probably use the $250 to take his wife out to dinner, because such outings have decreased in the past year while they tend to their baby daughter. And he thanked his co-workers and supervisors for their support.

“I really like working at UMB. I really like the people I work with,” Cancelli says. “And my supervisors, they’ve let me fly with no restraints. They have the trust in me to get the job done and do it right. They will guide me down the path if I ask for assistance, but most definitely, they say, ‘Here you go. Here’s the keys, son. Do your thing and get it fixed.’ ”