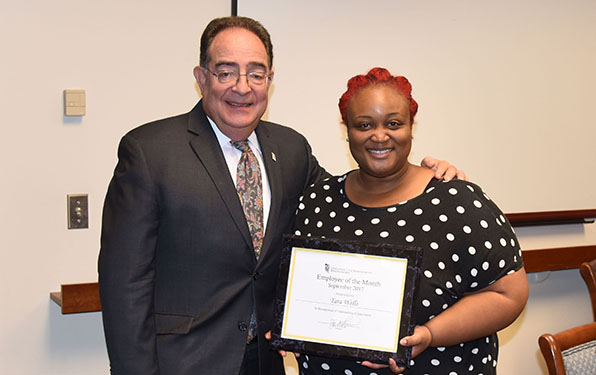 Tara Wells is a bit of a multitasker.

In addition to the numerous and varied duties she performs as an administrative assistant II in the Department of Organizational Systems and Adult Health (OSAH) at the University of Maryland School of Nursing, Wells is trying to buy a home and working toward getting her bachelor’s degree in communication studies from University of Maryland University College.

The heavy load, however, hasn’t slowed her down or affected her job performance. In fact, she thrives in such an environment, which was evident when she was named the UMB Employee of the Month for September.

“I’m on Cloud 9,” Wells said after receiving praise from UMB President Jay A. Perman, MD, a plaque, and word of a $250 bonus in her next paycheck. “I’m very, very honored. I’m beyond excited right now. I can’t stop smiling.”

Wells was instructed to report to the 14th floor of the Saratoga Building on Nov. 1 for a focus group with the UMB president. Perman did show up, but his mission was to put the group’s focus on Wells and to surprise her with the award. Attendees included School of Nursing Dean Jane M. Kirschling, PhD, RN, FAAN; associate professor and OSAH Chair Kathleen Michael, PhD, RN, CRRN; and OSAH administrator Wendy Bridges, who is Wells’ supervisor. All three beamed with pride as Perman spoke about Wells.

“People say that you always address every challenge and many requests that support and honor the students,” Perman said to Wells. “And I care very much about the students, because in the final analysis, that’s the reason we’re here. And I know you buy into that.

“I’m also told that you excel in performance, you go above and beyond what’s written in your job description, and you’re a team player. And if you know anything about me, teamwork is the thing that most excites me about what we do here. We do it together and we support each other.”

Wells, who joined the School of Nursing in 2012, plays her supporting role well, with tasks that include scheduling for the department chair, making sure nurses’ conference registrations are paid, keeping track of supplies for faculty and staff, maintaining a spreadsheet of faculty leave requests, creating and formatting certificates for preceptors, collecting timesheets from teaching assistants, and even planning parties.

“For the most part, that’s my title — I assist. So anything anybody needs, I assist them,” Wells said. “For instance, we’re having a party today, so I had to plan that, getting the food and other items, and that’s not an easy task. So I do a lot of everything.”

Like a Jack of all trades, she was asked. Wells responded with a laugh, saying, “Actually, I’d call it a Jacquelyn of all trades.”

Two traits of Wells’ trade are professionalism and patience, which were on display recently when a School of Nursing graduate was in California and struggling to get the proper paperwork needed to gain approval for an Advanced Practice Registered Nurse license. Wells said she was supposed to go home early that day but stayed late instead, juggling phone calls, emails, and faxes for more than two hours until the issue was resolved.

“It seemed like it was urgent, and I always put myself in other people’s shoes. If I really needed something, I would want someone to stop and help me. And I did,” she said.  “I didn’t mind staying late. I’m just glad he got what he needed, and he emailed me to thank me. And that makes me feel good.

“I’m a people person, so I love to be interacting, and that’s why I took to the field of communications [for her studies],” added Wells, who said her future goals include becoming the executive producer of her own talk show. “I don’t like to be isolated in my job. And this job helps me to be in communication with people all day, every day.”

Asked what she likes best about her job, Wells said she loves the students, the staff, and especially her bosses.

Kirschling said the feeling is mutual.

“We have amazing staff, and Tara is one of our stars,” the School of Nursing dean said. “We’re just so grateful for all that she does, and I’m so proud of her.”