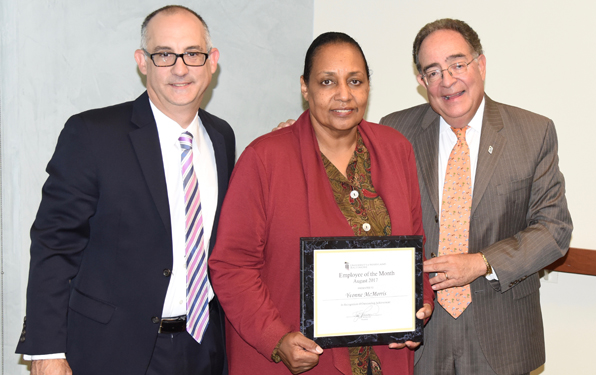 Yvonne McMorris is a kind and trusting soul. Therefore, when her Carey School of Law colleagues told the faculty support manager she needed to attend a learning and development meeting on the 14th floor of the Saratoga Building on Sept. 28, she believed them.

She still believed them when UMB President Jay A. Perman, MD, entered the conference room and sat beside her. When he said she did a great job, she thanked him and waited for the meeting to start.

When Perman stated he had a lot to say about McMorris, she softly asked, “This is not about learning and development?” Even several minutes after being told she was UMB’s Employee of the Month, she still could not get over the fact the scheduled meeting was a hoax, saying, “And I came here with notes and everything,” to the delight of the cheering and laughing group assembled for the occasion.

“One of the faculty wrote that you are both the most competent and the most dedicated faculty assistant with whom she has ever worked,” Perman told McMorris. “She talks about the fact that when faculty are working against a deadline, it’s almost always you volunteering to stay late to finish the work.”

After receiving a plaque, a letter, and a promise of $250 in her next paycheck that brought her to tears, McMorris leaned back in her chair, still in disbelief, and answered questions about her UMB career.

A legal secretary in New York before moving to Maryland, McMorris came to the law school in March 1999 to do secretarial work. A diligent worker, she quickly showed a “thirst for knowledge,” according to Mary Alice Hohing, director of administration and operations, taking classes to improve her skills, earning promotions to administrative assistant II (2001), coordinator for faculty support (2006), and office manager (2014) after obtaining her bachelor’s degree in interdisciplinary studies from the University of Baltimore.

Curious by nature, McMorris says it’s impossible to work at the school and NOT learn something. “I tell staff when your professor is writing something, engage them, ask them what it is they are writing about, and become interested in what they are doing,” she says.

She said that professor emeritus David Bogen, LLB, LLM, educated her about black history and slavery while he was writing a book about it. “Just sitting there and listening, gaining the knowledge that he has — that is how it is when I am with each professor,” McMorris says. “If they are writing, I like to ask them questions.”

In addition to reading articles, books, and manuscripts for the professors, McMorris puts together recommendation letters, assists with research — “whatever faculty needs” — and helps train her fellow staff members.

Her efforts are most appreciated.

Professor Donald Gifford, JD, who calls McMorris the most competent and dedicated faculty assistant with whom he has worked in nearly 40 years in legal education, says, “When some other assistants are faced with a challenging task, they respond, ‘It can’t be done.’ In contrast, Yvonne’s response is always ‘I do know that can be done. Let me see what I can do.’”

Professor Paula Monopoli, JD, adds, “Yvonne is a role model for all the other administrative assistants whom she helps to supervise. Her willingness to pitch in at any time demonstrates her excellence as a team player.”

“I often say that great law schools are made up of great people — great students, faculty, staff, and alumni,” says Dean Donald B. Tobin, JD. “Yvonne McMorris is a perfect example. She represents our excellence. She is always willing to lend a hand; thinks ‘yes’ before ‘no’; and is always willing to take on new challenges and learn new things.”

When she read some of the faculty’s comments, McMorris smiled and said, “Wow, I’ll have to thank them.”

Although she never expected to be August Employee of the Month, McMorris admits, “I give a lot.” She tells of running into an associate dean at midnight at the school when they were working on deadline projects, of students she has watched “blossom,” of longtime faculty such as William Reynolds, JD, and Daniel Goldberg, JD, who have given her as much as they have received. “I am fortunate to be able work with such wonderful people,” she says.

She attributes her work ethic to her faith and her parents.

“First of all, I’m a Christian, and the Bible states that I can do all things through Christ because He strengthens me. While living in England, my mom left nursing school to take care of her family. After my sister, brother, and I graduated from high school here in the United States, my mom went back to school full time for nursing, while she had a full-time job — it was now my mom’s turn. My mom gave me the inspiration for going back to school because she was my role model. She set the example. And she always says, ‘America is the land of opportunity.’ ”

With a wistful look, McMorris looked around the president’s conference room and exclaimed: “I am going to tell my children what happened today! I can’t believe this!”