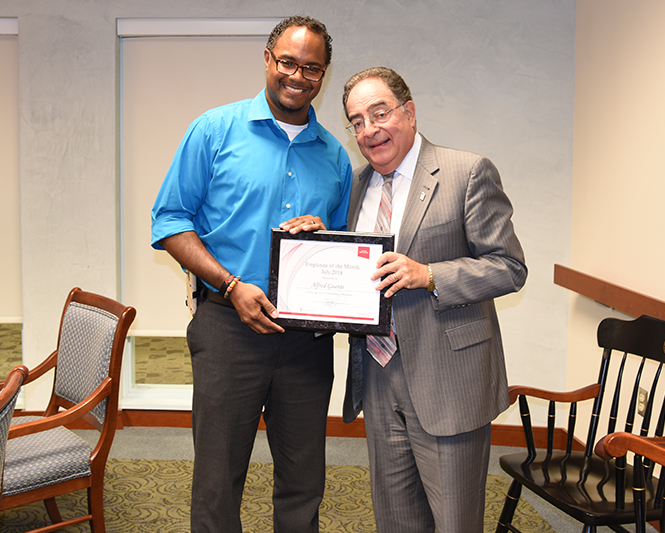 Alfred Guante, MEd, is the father of a 2-month-old boy, so he says getting an extra $250 in his next paycheck will surely be spent on his new baby. It’s fitting, then, that his work with what might be considered his other baby, the Student Ambassador Program at the University of Maryland School of Nursing (UMSON), is what earned him the cash bonus.

Guante, assistant director of the Student Success Center in the UMSON Office of Student and Academic Services (OSAS), was honored as the University of Maryland, Baltimore’s (UMB) Employee of the Month on July 18 at the Saratoga Building, earning the bonus, a plaque, and a letter of commendation from University President Jay A. Perman, MD.

Guante was summoned to the President’s Conference Room along with four OSAS colleagues for what he thought was a meeting to discuss expanding the Student Ambassador Program to other schools on the UMB campus. Instead, Perman and UMSON Dean Jane M. Kirschling, PhD, RN, FAAN, crashed the meeting to deliver the good news and congratulations.

“Your colleagues said some very nice things about you,” Perman told Guante. “I hear you have a passion for working with students, a tireless work ethic, and a lot of experience in higher education institutions. People here are very proud to have you as a co-worker, and I’m proud that you’re a part of this University.

“I’ve been reading about the Student Ambassador Program — that’s a fantastic idea,” Perman added. “Do you think we need to build that beyond the School of Nursing?”

“I think so,” Guante said. “I think the students would take a liking to it.”

Guante kicked off the program last spring with a first cohort of 22 students, who lead tours of the school, do community service, take part in workshops, mentor incoming students, and represent the student body at events. Guante, who initiated the program,  said several ambassadors even sat in and observed candidate interviews for UMSON staff positions.

“It enriches their experience at the school,” Guante said, “and it allows them to add something to their résumé or say something unique in a job interview. ‘What separates you from the field?’ ‘Well, I consider myself a leader. I was a leader at my school as a student ambassador. I helped plan events and helped the school attract prospective students.’

“At orientation, the ambassadors facilitate discussions at roundtables for new students and welcome them to the school. In open houses, they serve on panels and as speakers. So we are putting them in positions they’re not always exposed to, because it’s always just schoolwork, schoolwork, schoolwork. It provides them some extra skill sets and growth opportunities before they graduate and go out into the world.”

Guante, who has worked at UMSON for two years, says the program grew out of his previous work experience in student services or admissions offices at the University of Connecticut, Anne Arundel (Md.) Community College, and Albertus Magnus College in New Haven, Conn.

“We all do academic advising and academic coaching as part of the core of the Student Success Center, but I also oversee career development and leadership for all students,” said Guante, who along with his wife also is the proud parent of an 8-year-old daughter . “And as part of the leadership development, I thought the school needed a little bit different program, and that’s where I came up with the idea for the Student Ambassador Program.”

Christine King, EdD, MSEd, director of the Student Success Center, thinks it was a splendid idea, praising Guante for his dedication to students and noting its success in the spring semester. All 22 students from the first group are returning for the fall semester, and 10 more ambassadors are coming on board.

“Alfred recruited a large number of talented nursing students to represent the school, and they received very positive feedback,” King said. “It’s largely because of Alfred's excellent rapport with our students that this program has been so successful in its launch.

“Alfred has consistently gone above and beyond for the School of Nursing, and he is an excellent team player with his OSAS colleagues and the rest of the school. It is because of these relationships and the time and effort he puts into them that he can strike such a  great balance in working with faculty and staff and serving our students.”

Guante says he was honored to be UMB’s July Employee of the Month — “This was a good little boost of self-esteem,” he said — and  thankful that his superiors at UMSON allowed him the freedom to launch the Student Ambassador Program.

“Something like this would never happen if you didn’t allow your employees to be creative,” he said. “So I give great credit to the OSAS for allowing me to run with it. We have a good, tight-knit group in our office. We have a special team.”