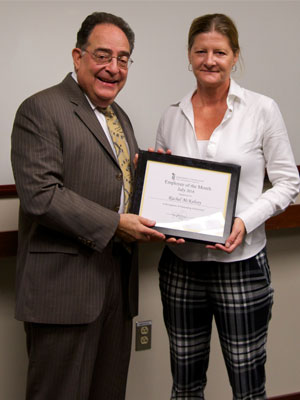 For those at the University who grapple with technology, people like Rachel McKelvey are a godsend.

McKelvey, academic coordinator in the office of the academic deans at the School of Nursing (SON), was named UMB’s July Employee of the Month for pioneering many guidelines and practices to better facilitate the new systems and processes put into place as the school transitions from paper to electronic documentation.

“What I’ve tried to do is communicate with students, faculty, and other staff people to make the process a little easier for everyone,” said McKelvey, who has been at the SON for 2 ½ years after six months of temporary work at the School of Pharmacy. “Because it is an electronic uploading to a website I think a lot of people have trepidations and fears about that and it is a technical process. So I’ve become proficient at it to the point I can really walk someone through the steps.”

In addition to expediting the student turnaround time for documents uploaded into the compliance vendor, Castle Branch, from 72 hours to “less than an hour and a half,” McKelvey has enhanced communications and collaboration, says her supervisor Angie Hines, who attended the Employee of the Month presentation with a half-dozen others Aug. 3.

“Rachel has been instrumental in opening up communication lines and breaking down barriers students previously encountered,” Hines said. “Which not only helps our office, but also it’s a humongous resource for students trying to get into their clinical sites and practicums.”

University President Jay A. Perman, MD, was impressed with Hines’ story that brought McKelvey to the Saratoga Building — she was to participate in a group that would be giving awards to faculty across campus — as well as her accomplishments.

“I understand you’ve done a great deal within the nursing school in terms of efficiencies, particularly trying to convert so many things from paper to electronics. You know, I could use your help over here with my files,” Perman said with a smile. “The other thing people wrote about you is that you’re a great team player. And I particularly value ‘team.’ So keep up the great work!”

McKelvey, who received a plaque and $250 for the award, was most grateful.

“I’m in a little bit of shock right now but I’m thrilled,” said McKelvey, who thanked Hines and cited faculty members Meg Johantgen, PhD, RN, Shannon Reedy Idzik, DNP, CRNP, FAANP, and Gail Schoen Lemaire, PhD, PMHCNS, BC, CNL, for their support. “While I'm overwhelmed to be recognized by the University and President Perman, what I value the most is that my everyday colleagues have taken it upon themselves to show their appreciation of my efforts. It means an awful lot. My parents are going to be very proud.”