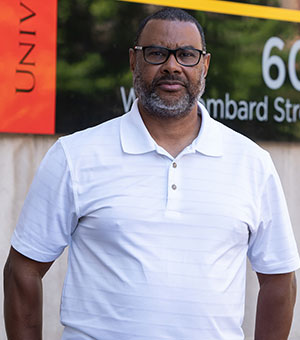 Now, the couple both can claim the honor.

Williams learned during a Webex videoconference with UMB President Bruce E. Jarrell, MD, FACS, on May 14 that he is the May 2021 Employee of the Month for going above and beyond in his role to receive deliveries at HSHSL during the pandemic.

When FedEx or UPS was delivering equipment such as computers, Williams, who was working on campus but under modified hours while the library was closed, gave drivers his personal cellphone number so he could make sure he was at HSHSL to receive the deliveries.

“I might have missed that first week in March 2020, but we had shipments that were already coming down the pike,” he said. “I was basically coming in daily and coordinating deliveries, coordinating with UPS and FedEx through all last summer.”

“It’s been a very long year, and I just want to thank you for being willing to just take on anything that came your way,” she said, pointing out that he even voluntarily took responsibility for accepting packages for other units, including receiving student transcripts.

“Patrick was the only person in the building most times during the beginning of the pandemic, just securing our property,” Bodycomb said.

She also talked about an instance where Williams secured the building as well. One day while he was working in HSHSL, he heard a strange clanking noise and reported it to Bodycomb.

“It turned out that the sound he heard was from a piece of equipment failing that needed repair, and his report allowed the equipment to be repaired before complete failure, which would have impacted the building,” she said in her nomination form.

As postal services supervisor, Williams’ main duty is to coordinate deliveries, shipping books to other universities in the University System of Maryland and nationwide.

During the pandemic, Williams moved around his workspace and mailroom as well as mail processes to make them safe for everyone who entered.

He also helps library staff and other departments on HSHSL’s second floor such as registration, financial aid, accounting, and the Center for Information Technology Services with mailing questions or problems.

“A lot of times when it comes to mailing things, people might need help with how to address it or how much postage is needed, so I help people with that,” he said. “I know that can be a headache, so that’s why I just enjoy helping people with a problem that they might not be too familiar with.”

Williams has been working at the University since 2008. His wife, who was a resource management coordinator for UMB when she won the award, is now director of alumni relations and career services at the University of Maryland School of Social Work.

As Employee of the Month, Williams will receive a plaque, a letter of commendation, and an extra $250 in his next paycheck.

Williams said he was “overwhelmed” by the honor and thanked Bodycomb as well as M.J. Tooey, MLS, AHIP, FMLA, executive director, HSHSL, and his “administration family.”

“I feel very grateful,” he said. “This is not something that happens without positive feedback and kind words from my co-workers and the tenants on the second floor. Without them giving positive feedback, I know that it’s not possible, so that’s what makes it special.”