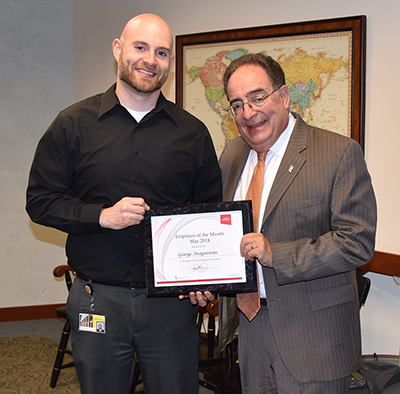 As senior instructional technology specialist at the University of Maryland School of Pharmacy (UMSOP), George Anagnostou, MS, is tasked with many duties. The most challenging and time-consuming is providing support to faculty, staff, and students in the administration of computer-based exams.

“Exams have dominated our lives because they’re such an important part of what my team does,” says Anagnostou, a six-year UMSOP employee. “It’s one of those things where if something were to go wrong, it’s sort of, ‘Stop what you’re doing and make sure this exam is taking place as expected.’ It’s a big chunk of what we do.”

It’s clear that Anagnostou aces all his job tests, because on May 21 his efforts were recognized with the University of Maryland, Baltimore’s (UMB) Employee of the Month Award for May. UMB President Jay A. Perman, MD, surprised him with the honor in the President’s Conference Room at the Saratoga Building, where Anagnostou thought he was attending a meeting to discuss online graduate programs with representatives of the Graduate School.

“Actually, this meeting’s about you,” Perman told him after popping into the meeting unannounced. “You do something very important for students. You make it possible for them to navigate through exams as easily as they can. I care deeply about people who improve the lives of our students, because as I often say, they’re the only ones who are paying to be here, right? So we ought to make it good for them, and you do that every day.”

Six of Anagnostou’s colleagues from UMSOP were on hand to celebrate his award, including Andrew Coop, PhD, associate dean for academic affairs, and Shannon Tucker, MS, assistant dean for instructional design and technology. They had another surprise for Anagnostou. That party scheduled for 3 o’clock back at the school? That was to celebrate this award.

“Testing is a high-stress situation for all,” she says. “In George’s methodical support of our community, he always considers how our processes could be improved. He is willing to advocate for the right solution that balances accreditation, course assessment goals, and the experience of students, faculty, and staff — even if it means more work for him.”

Tucker specifically praised Anagnostou’s work with the ExamSoft software, as he manages support for students of varying technology skills who have a variety of operating systems, laptop brands, and configurations.

“His efforts to support students and strategically use vendor support has helped reduce the incidence of in-exam technology issues between academic years,” Tucker says. “His ability to balance customer experience with the organizational needs of the school makes him a pivotal part of the academic affairs team.”

ExamSoft is a secure testing platform the school uses to deliver most of its exams, with Anagnostou estimating that all but four of 40 courses use it and that the school distributed more than 50 exams using the system this past semester.

“With this software, we reduce the amount of paper we need to utilize for exams,” he says. “We’ve shortened the amount of time it takes to administer exams, so that’s been a big benefit. And the students’ feedback has been that they prefer to take electronic exams over paper exams.”

Anagnostou has other duties beyond exams, such as supporting the Blackboard course management system and consulting with faculty on the technological aspects of taking ideas from inception to implementation. It’s a difficult job involving a wide range of people, he admits, but it’s those personal interactions that fuel his efforts.

“Honestly, the favorite thing about my job is the people,” Anagnostou says. “That’s one of the reasons I got out of strictly information technology work, because that’s too much in a bubble.”

In addition to all the praise, Anagnostou received a plaque, a letter of commendation from Perman, and news that an extra $250 would be in his next paycheck. He says the money will come in handy as he and his wife, 20-month-old son, and mother are taking a vacation to Greece, his parents’ homeland.

“This is a wonderful honor,” Anagnostou says. “To be recognized for the hard work that I and my team do is really nice. It was totally unexpected, and I’m just thrilled.”