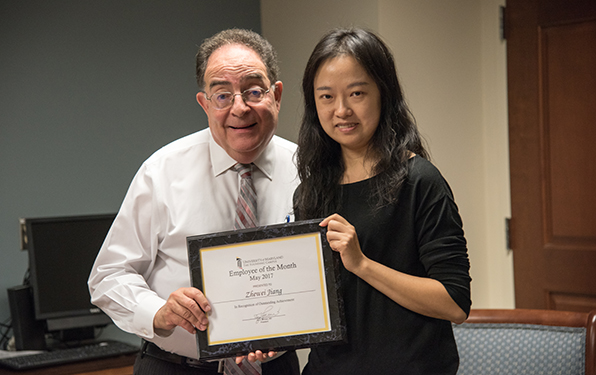 Zhewei Jiang, an IT enterprise developer for the Center for Information Technology Services (CITS), made her way up to President’s Office on the afternoon of May 11 expecting to attend a meeting about document management systems. She was joined by Peter J. Murray, PhD, chief information officer and vice president of information technology, and Michael Smith, executive director of administrative apps, for the “meeting.”

When UMB President Jay A. Perman, MD, walked through the conference room doors and introduced himself to Jiang, she was visibly surprised. She politely said it was a pleasure to meet him, to which Perman responded: “It’s more of a pleasure to meet you.” Perman then announced the real reason for the “meeting”: Jiang had been named UMB’s May Employee of the Month.

He detailed positive comments given by other UMB employees about Jiang’s work. That with the help of her supervisor, Jiang has implemented and supported the campus-based ImageNow document management system, which stores over 8 million images. It allows the entire University to digitally scan, route, store, and access important documents while streamlining workflows, enhancing the operational efficiency of multiple schools and departments.

“In addition, your customer service skills are appreciated by your many admirers,” Perman said. “You go out of your way to be helpful, and that is important to me.” Perman’s positive comments were echoed by others in the nomination form by Jiang’s supervisor, Douglas Bowser, director of enterprise applications.

Jamaica Cosby, assistant director of Human Resource Services (HRS), said, “I cannot thank your team enough for the extraordinary customer service that you have delivered by explaining every step of this process and introducing me to concepts and capabilities that I did not know even existed.” Before ImageNow was implemented, HRS was required to enter every performance evaluation form into a central database manually.

The School of Nursing (SON) also expressed its thanks. “Because of Zhewei, SON has been able to reduce processing time and staff workloads while simultaneously creating an opportunity for SON to provide updates and personalize messages to students and end users,” said Marchelle Payne-Gassaway, MS, director of admissions.

Despite the challenges that ImageNow and other University systems can present, Jiang — who has worked at CITS for five years — enjoys her job. “I’m always working with different schools and different people,” she said. “You’re always learning something new.”

Jiang received a plaque, as well as a $250 addition to her next paycheck as a reward for being Employee of the Month. “This is a great honor. I truly appreciate it,” said Jiang.

Once nearly everyone had left the room, her colleague Smith offered a final salute. “She deserves this. She is very timely and has great customer service skills,” he said.

Jiang was modest in her response. “It’s not just me. I have a great team. Whenever I need support, I can always talk to my team about what I need, and they always respond. We all work together,” she said.