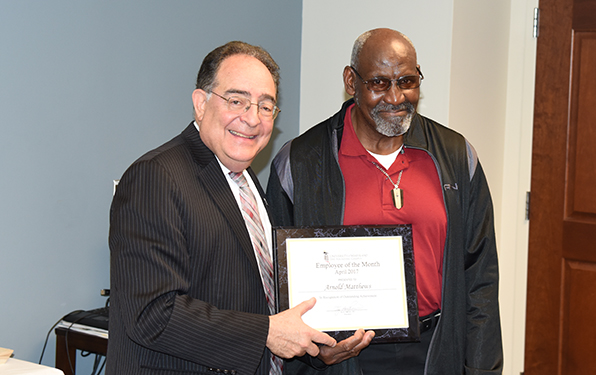 For someone who was born across the street at then University Hospital and raised just around the corner, Arnold Matthews has come a long way at the University of Maryland, Baltimore (UMB).

On April 27 he took paperwork to the President's Office as part of his "daily run" only to be met by his Francis King Carey School of Law colleagues Dean Donald B. Tobin, JD, Mary Alice Hohing, Barbara Gontrum, JD, MS, Mary Jo Rodney, Joanne Macenko, and UMB President Jay A. Perman, MD, who told Matthews "you are the UMB Employee of the Month."

Perman went on to tell Matthews some of the wonderful things in his nomination form. For instance, when the other member of the two-man Carey Law facilities team had to go on medical leave "you worked extra hard, you never complained, you did your job, and more," Perman said. "That's an extraordinary example for all of us."

After the president, dean, and supervisors had left the conference room, Matthews let out a sigh, smiled, and said he had just done his job while his colleague was ill. "I figure if I had gone down [sick], my co-worker would have stepped up. I don't feel I did anything different than anyone else would have done," said Matthews, who has worked at the law school since 2006. "OK, I might have put in a couple more hours, but that’s not here or there. It needed to get done and I did it."

That kind of "can-do" attitude has ingratiated Matthews to his Carey Law colleagues. Hohing, director of administration and operations, said in her nomination, "Arnold is a joy to work with; he has a terrific attitude and no job is too big or too small. He is extremely dependable. He does whatever is needed, timely and efficiently, and works to make sure the law school is always seen in a good light."

Besides delivering materials all over campus, his duties include making sure instructors have all the supplies they need, monitoring the building every day for needed repairs and safety issues, moving furniture, handling small handyman projects, distributing mail and maintaining the postage equipment, changing toner in printers, delivering copy paper, summoning University helpers for things he can't fix — "all the little things to help keep the law school running," Matthews said with a smile.

Dean Tobin clarifies that there is nothing "little" about Matthews' contributions. "Arnold is truly amazing and is essential to our success," Tobin said. "He is a hard worker who cares deeply about the institution and members of its community. Basically Arnold will do anything asked to make something great."

That includes Matthews' favorite part of the job: helping with events. He takes pride in making sure they come off without a hitch, not only preparing rooms for dinners, receptions, and meetings at the law school, but doing whatever is needed to guarantee the event's success. "There’s a lot of things going on over there," he said. "Sometimes I bartend, other times we set up food and help with the decorations," said Matthews, whose multiple talents are appreciated by his co-workers.

Rodney, Carey Law's director of special events, said, "Words alone cannot express how grateful we are to have Arnold on our events team – not only is he an effective member of the team, he is truly a wonderful person."

Matthews, who received a plaque and an extra $250 in his next paycheck, appreciates the platitudes, but says he's just doing his job — a job he likes a lot.

"I came from construction, it's a lot better than carrying bricks," said Matthews, who also worked in a factory and served in the military. "I did construction of some sort — plumbing, irrigation, bricklaying — for like 16 years before I came here. Now sitting at a desk I never thought – I just always said I'm not that kind of person. I’ve got to be outside doing things, you know? But this is much easier on my body."

Not that he spends much time sitting. He's only at his desk long enough to check his emails to see where he is needed next.

Told that Dean Tobin had mentioned his "friendly, customer service-oriented approach" Matthews replied, "Well, that's the job. When you're working with the public you're supposed to put on a good face and [create] a good atmosphere. Being grumpy and mean all the time — that isn't me because then the other person is mean. If you show you're a good person the other person will show they're a good person, too."

"Things work smoother that way," Matthews added with a smile. "That’s the way I was brought up."